2 men with 2 dogs in S’pore book regular Gojek ride, driver turns them down, no one wants to cancel trip, heated standoff ensues 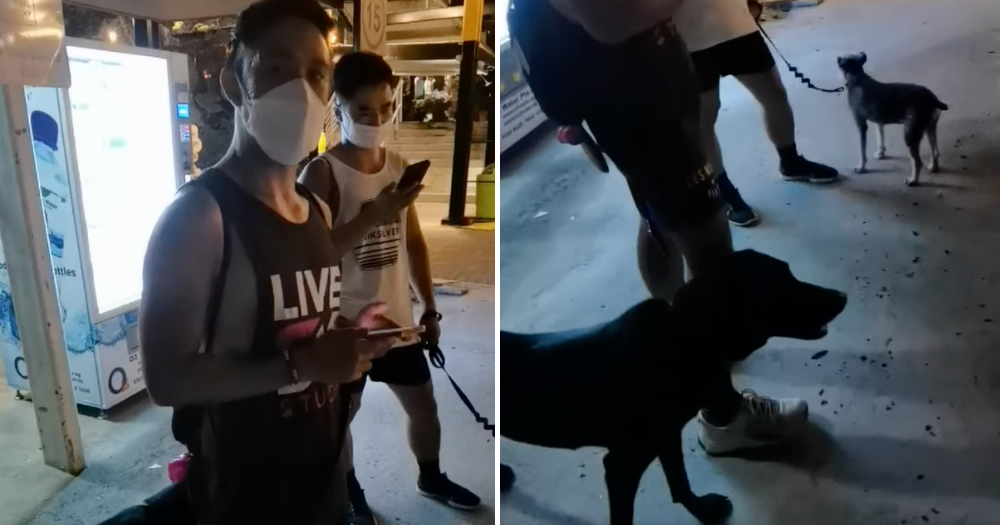 A Gojek driver in Singapore got into a heated argument with two customers with their dogs in tow, after the pair of men who booked the ride refused to cancel and pay the cancellation fee when they got turned down.

A video of the stand-off filmed by the Gojek driver was uploaded to Facebook on Mar. 6, and has since garnered over 1,600 shares.

The kerfuffle started over the driver’s alleged fur allergy, which prevented him from taking the booking.

He also said his car that accepts regular passengers was not for animals as there are other existing services to ferry them.

The two customers had booked a ride from Tanglin Road to Novena, and had apparently messaged the driver to inform him they had two dogs with them.

In the video, the customers’ dogs appear to be a Singapore Special and a Schnauzer.

The driver, however, argued that as he was driving, he was unable to read their message until he had arrived at the pick-up point.

According to the driver, the two customers initially said that they would cancel if he was unable to ferry their pets, but did not do so even after a few minutes.

The pair were apparently not willing to cancel the ride as they had to pay a S$4 cancellation fee.

In the video, the driver said:

To which the customer says:

“Nothing to do with size, my dear.”

The customer added that he has “done this many times”, and said:

“I’ve booked Comfort, I’ve booked Gojek, and I’m not going to argue with you. So you can choose to do what you want, go ahead.”

The driver continued to accuse the customer of “cheating” and “hijacking” his car by refusing to cancel the ride, and pointed out that he should have booked the correct service that allows pets instead.

“If you booked the correct one why [would] I ask you to cancel?”

He then criticised the customers for being cheapskate, and choosing not to pay more to book ride-hailing services, such as GrabPet, that can ferry pets.

The video cut off without any apparent resolution between the two parties.

However, the driver said in his Facebook post that he was subsequently stuck there for around 20 minutes, as he tried to call Gojek’s customer service to cancel the ride.

“Pls dun take advantage of driver when petrol is sky high and fare is so low, we only want to put food on my table for our families.”

A large majority of social media users took the side of the driver.

Here are some reactions. 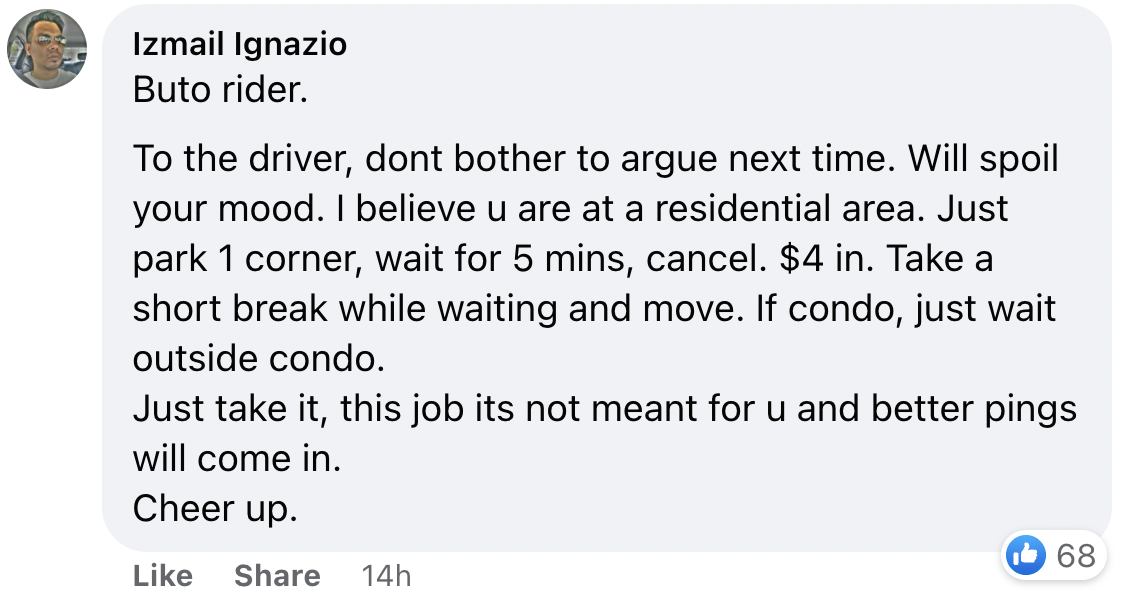 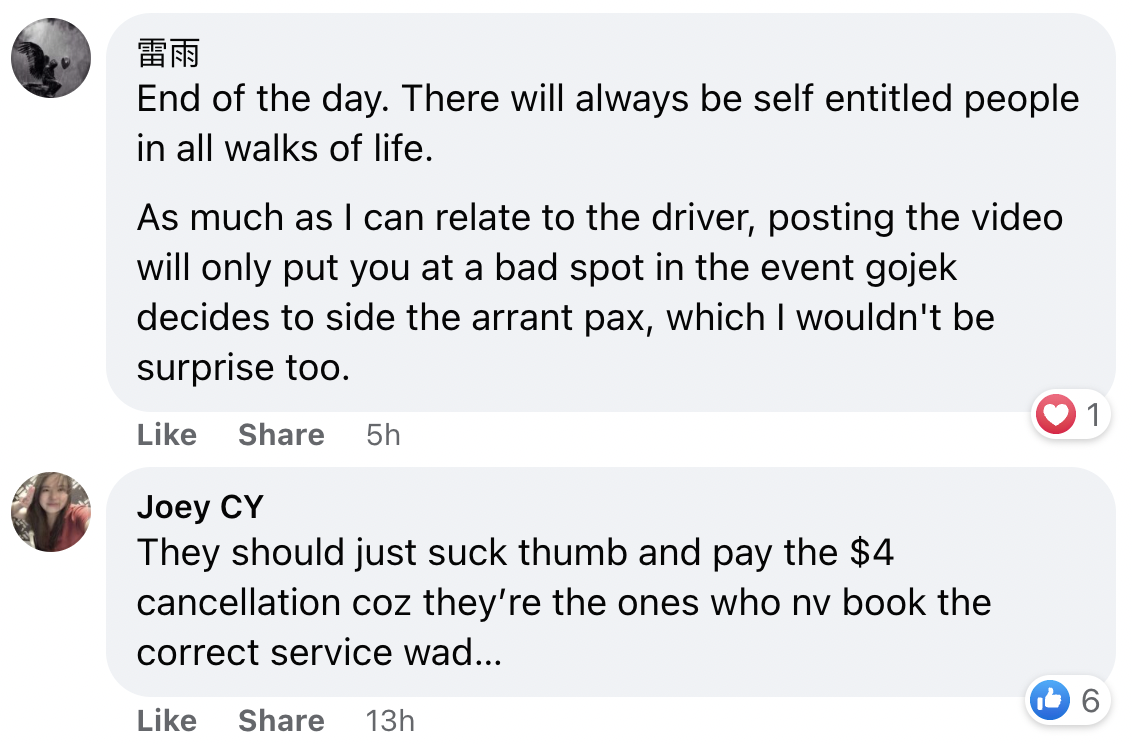 Meanwhile, some users admonished the driver for filming the customers. 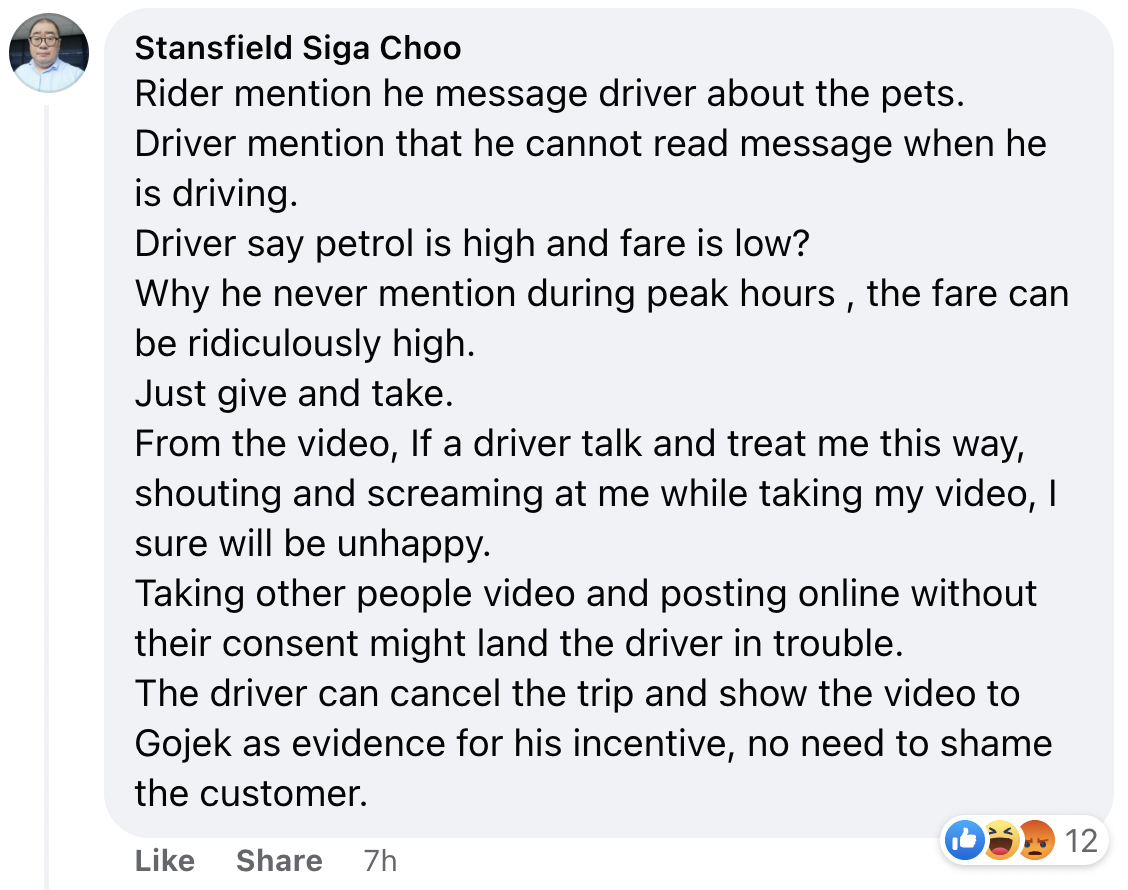 Gojek does not have option for riders with pets

According to Gojek’s Help Centre, the ride-hailing service currently does not have a separate option for riders with pets.

It advises pet owners to let the driver know about their pets via the app’s chat function, and said it will match riders with other drivers if the first driver cancels.

Grab, on the other hand, has a dedicated ride-hailing option for pet owners.

Ryde also has an option for pet owners, called RydePET.