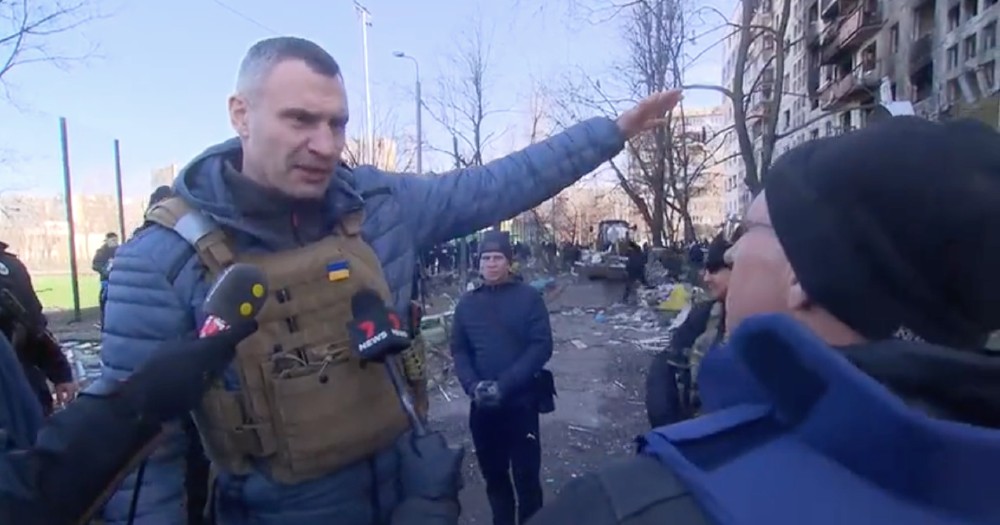 Kyiv mayor and former heavyweight boxing champion Vitali Klitschko wasted no time telling a reporter exactly how he felt while leading some journalists through the war-torn streets of the capital city.

Walking past a residential building destroyed by Russian forces, Klitschko was asked to comment on Putin’s claim that Russia was only attacking military targets in Ukraine.

Klitschko furiously spat out, “Bullsh*t!”, before apologising for his foul language.

The clip of Klitschko’s heated reply has since attracted over 8.2 million views on Twitter, with many praising the mayor’s no-nonsense response.

Russia claims its only hitting military targets. What does the Kyiv Mayor say to that? “BULLSHIT!” he spits. A former boxing champion, Vitale Klitschko delivers knockout sound bites that get straight to the point. Feel free to share #Ukraine #Kyiv pic.twitter.com/GvFs7ZWIUz

“Where is military target?”

7News reporter Chris Reason, who shared the clip of the interview to Twitter on Mar. 16, said to Klitschko: “Putin says he’s only targeting military targets.”

After delivering the “knockout soundbite” as Reason described, Klitschko then stops to point out the bombed-out apartment building next to them.

Klitscho’s and Reason’s interview received praise from all over the world, including from Associated Press correspondent Philip Crowther, who called it “one of the all-time greatest interviews”.

Crowther himself had previously received praise for reporting on Ukraine in six different languages.

The Washington Post reported that Russian forces had hit civilian buildings in the Obolon and Podilskyi districts in Kyiv on Monday (Mar. 14), killing two and injuring several others.

On Mar. 12, Ukraine accused Russia of killing seven, including a child, in an evacuation convoy near Kyiv.

On Mar. 10, Russian airstrikes hit a maternity and children’s hospital in the city of Mariupol, despite earlier agreements of a ceasefire to allow civilians to escape the city.