From Geography textbook editor to food delivery rider, foodpanda rider explains why current job a ‘match made in heaven’ 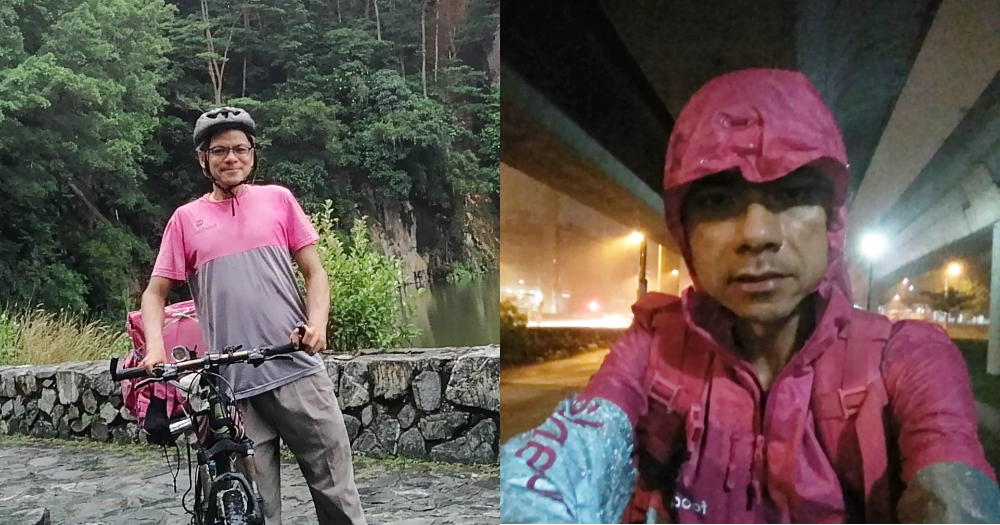 For 20 years, Jimmy Tan worked as an editor for an education publishing company and edited Geography textbooks that many Singaporean students would have come across.

Though he said the job was fulfilling in some ways, the desk-bound nature of the role, coupled with a rigid management style and having tough deadlines to meet, was “mentally draining” for him.

The stress of the job even landed Tan in the emergency room in 2005 after he experienced heart palpitations in the middle of the night.

In 2016, Tan decided to do part-time food delivery with foodpanda to supplement his income and eventually left his editorial job two years later.

The 48-year-old said with much relief:

“I no longer have to deal with company bosses who are sometimes breathing down our necks and will chase us when there is a project due.”

Having time to slow down and pursue his passions

Tan recalled how in his previous job, he would cycle from his home in Bukit Batok to his office in Paya Lebar.

There were times, Tan said, he would take a different route, to admire the scenery and horses at Bukit Brown.

“I wish I had time to slow down and stop to take photos, but I had to keep telling myself: No, I have to reach work on time, otherwise my bosses will scold me,” he said.

As a delivery rider, Tan said he now has the opportunity to slow down if he wishes:

“Whenever I happen to deliver food to customers staying in a tall building and if I have the time, I will take a lift to the highest floor and take aerial photos of the surroundings.”

“[I take these photos] to see how much the landscape has changed, and use my photos for creating awareness to show how much urbanisation has encroached on the natural environment,” explained Tan.

Being a delivery rider on a bicycle also opens up the possibility for Tan to choose his own hours.

Tan’s workday is now just six hours long, split into two three-hour lunch and dinner shifts, with a three hour break in between.

Tan enjoys the flexibility of his daily break, which he takes from 2pm to 5pm.

He uses this time to have some tea, take a nap, do some freelance work or, if he finishes his shift near a park or a forest, to even go on a hike in the middle of his work day.

This was a “born-again experience”, Tan said of his delivery rider job after working in a desk-bound job for so long.

Tan bemoaned how previously he had to seek permission just to step out of the office.

“I can finally go outdoors. For the past five years working as a foodpanda rider, as I cycle around, I get to pass by nature areas and park connectors,” said Tan.

Doing so allows Tan to witness first-hand how much the environment has changed, especially in areas like Tengah, where he observed how a formerly large forest had been cut down.

Apart from delivering food to support his wife and elderly mother, who he considers his “blessings”, Tan also does freelance writing, editing and some editorial training.

Whenever he agrees to a freelance project, Tan can easily accommodate by choosing to do one delivery shift instead of two on certain days if need be.

On top of freelance writing and editing, Tan also does freelance photography, videography and digital music creation, and takes time to work on his YouTube channel that focuses on social and environmental issues.

Tan shared that another big plus of being a delivery rider was also no longer having to deal with overbearing bosses anymore:

“Now I don’t have to deal with pleasing the boss, my primary focus is pleasing the customer. If I make any mistakes, I will bear my own consequences, and learn from my own mistakes.”

Tan also preferred being graded on his performance by an algorithm, rather than by “humans who are inherently subject to biases and errors”.

He appreciates the lack of office politics, hierarchy, and getting to have a “quiet and peaceful” environment to work in.

“A match made in heaven”

Being a delivery rider, Tan said, was a “match made in heaven” for him.

He said of his previous job:

“Over a long time, it created a kind of mental fog, where it was hard to be creative when you are surrounded by four walls.

Nonetheless, he is grateful that this was the path he ended up on:

“I might have thought at the time, as an NUS graduate 20 years ago, that this was a lowly job. But I don’t see it that way anymore, I see it as a job that allows me to have flexible working hours, to have a chance to exercise, and allows me to pursue my passions.”

Indicate your interest in becoming a foodpanda rider here.

This is a sponsored article by foodpanda.

All photos courtesy of Jimmy Tan. A fire broke out on Thursday (Dec. 8) morning at 91 Henderson Road in Bukit…