In defending principle of sovereignty, the only side S’pore is taking is our own: Bilahari Kausikan 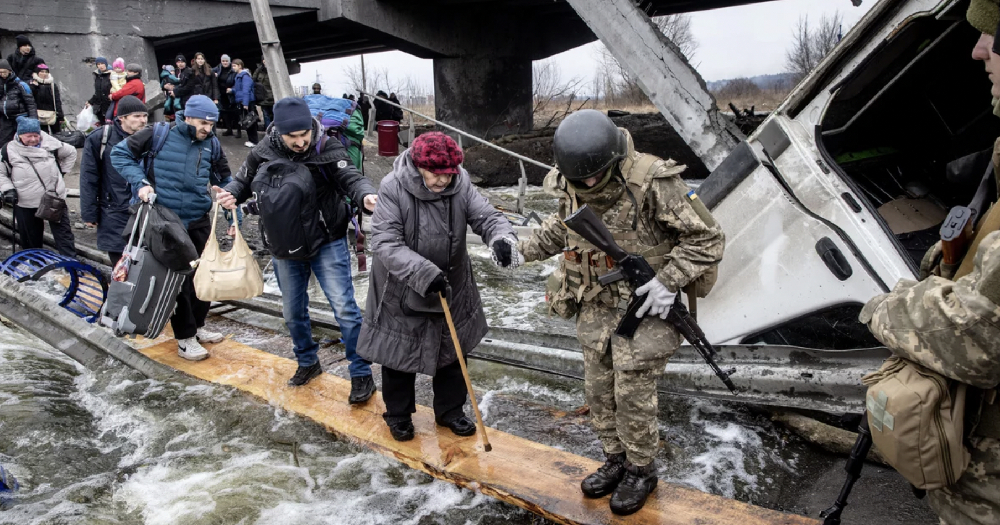 COMMENTARY: It is wrong for big countries to try to subjugate small countries by force. By defending this international norm, the only side Singapore is taking is its own, retired diplomat Bilahari Kausikan opined.

Bilahari is chairman of the Middle East Institute at the National University of Singapore.

Nobody can read Putin’s mind. But I think whatever his goals may have been at the beginning of this war, they have surely changed by now.

Even if he had intended to move beyond Ukraine, that is now not on the cards. Putin has his hands full. Ukrainian resistance and the international response has been firmer and more widespread than Putin probably expected.

Moving beyond Ukraine would entail a direct confrontation with NATO and that is simply too dangerous. Putin’s announcement of a higher nuclear alert was a signal that he understood this reality and that Europe and the U.S. should not intervene directly.

Beyond the announcement it does not seem that Russia did anything to change the readiness of Russian nuclear forces. In any case, the U.S. has not changed its nuclear alert status. Nuclear deterrence will keep the peace between NATO and Russia, as it did during the Cold War, and contain the war to Ukraine.

But, tragically, the price of this peace will be Ukraine.

The West will supply Kyiv with weapons and give it political and diplomatic support, but the U.S. has ruled out the use of American or NATO forces to defend Ukraine or implement a no-fly zone. These are correct decisions.

Ukraine will be defeated eventually

The war is not going as well as Putin and his generals may have expected but without external intervention, the ultimate outcome is not in doubt. The Ukrainians are fighting heroically, but in the end the sheer mass of the Russian offensive will overwhelm them. It will not be an easy victory for Russia but a grinding and bloody war with heavy casualties on both sides.

How will the war end? When the invasion began on 24th February, there were two broad possibilities: the ‘Donbass solution’ i.e. the installation of a puppet government in Kyiv; and the ‘Crimea solution’ i.e. annexation.

Having failed to achieve a quick victory, politically Putin now needs a clear victory and a decisive victory. It is increasingly difficult for him to compromise without looking weak and looking weak is an outcome he cannot accept. Putin’s right to rule rests on his having restored Russia’s strength and the world’s respect for Russia’s strength or at least the perception of strength and respect. Now that his war is proving more difficult than expected and doubts have been raised about the competence of his military, Putin’s legitimacy to rule Russia is ultimately what is at stake for him in Ukraine.

After the bitterness of a bloody war, it is also difficult to conceive of any quisling government in Kyiv being able to rule without the direct support of Russian forces. So one way or another, even after the fighting stops, Ukraine will be under direct or indirect Russian occupation for the foreseeable future. Some sort of insurgency may develop under Russian occupation and Moscow cannot take Ukraine’s stability for granted.

What are the implications for the region?

This will have four broad geopolitical consequences.

First, Putin has succeeded where all post-Cold War American presidents have failed: he has got the Europeans to take their own defence seriously. Overnight, Germany doubled its defence budget and overcame its long-standing taboo on transfers of weapons. Even neutral Switzerland has joined sanctions. This is a new structural factor in international relations.

Second, Putin has reinvigorated the idea of ‘The West’ which after the Cold War had loosened considerably and was in some danger of decomposing entirely. As long as Ukraine remains under Russian occupation, the West generally, and Europe specifically, will continue to cohere, even if some internal strains eventually appear.

Third, Ukraine has underscored the importance of regional balances and the vital role of the U.S. in such regional balances. Anxieties about China had always made Asian countries more aware of this strategic reality than other regions, even if not every Asian country was prepared to say so explicitly.

This strategic reality is now evident in the Middle East and Europe as well. Everybody may have some reservations about the U.S., but nobody has any strategic alternative to the U.S. except subordination to China or Russia.

Fourth, Russia’s invasion and China’s refusal to express disapproval of it, will further complicate U.S.-China relations and sharpen the line between them. Some very superficial analysts have tried to propagate the idea that the West generally and the U.S. specifically, will be so distracted by Ukraine as to give China a free hand in Asia as happened during the Iraq and Afghanistan wars.

This is a shallow view. The U.S. has made clear that its forces will not get directly involved in Ukraine. For reasons, that I have just stated, the Europeans are at last beginning to pull their weight in defence. The U.S. will backstop European efforts, but this time it is China’s partner, Russia, not its rival, the U.S., that is at war and distracted.

What are the implications for China?

War in Ukraine has confronted China with three mutually irreconcilable objectives and placed Beijing in a dilemma.

First, China wants to preserve respect for sovereignty, territorial integrity and non-interference as key norms of international relations. The reasons for this can be summarised in three words: Tibet, Xinjiang and Taiwan. The Russian invasion of Ukraine was a direct challenge to these norms.

Second, China wants to preserve its partnership with Russia because Beijing has no other partner anywhere with Russia’s strategic weight. Beijing and Moscow also share a common discomfort with a Western-oriented global order. China has not criticised Russia and I do not expect it to ever do so. Beijing hopes to play some role in brokering a ceasefire or a settlement, but China is not and cannot be a neutral party.

But at the same time, China is much more integrated into the global order than Russia and has benefited much more than Russia from that order.

Calling U.S.-China competition a “new Cold War” is fundamentally misleading. The U.S. and the Soviet Union led two separate systems that were only tangentially connected to each other. Their competition was between systems. The U.S. and China are both core components of a single global system and compete within this system. This is far more complicated than the binary competition of the Cold War.

The U.S. and China are connected to each other and other components of the global system by supply-chains of a scope and complexity that are unprecedented in history. Russia too is part of this system but apart from the energy market and certain commodities, it is a relatively peripheral economic player.

Chinese growth is already slowing for a variety of other reasons. With the 20th Party Congress scheduled for this autumn, the disruptions that a war in the heart of Europe are creating in an already fragile global recovery from the pandemic recession, must be of serious concern to Beijing. The watchword of the on-going “two sessions” (lianghui) is stability. Ukraine is the antithesis of stability.

Putin miscalculated and China followed him to a strategic dead-end

The third Chinese objective is to try and stabilise its relations with Europe and the U.S. as much as possible and, more crucially and immediately, avoid suffering collateral damage from sanctions directed at Russia.

This will be very difficult. Chinese netizens are still cheering Russia. Being subject to sanctions of an unprecedented scope, Russia has nowhere to turn to except China and whatever its reservations, I doubt Beijing can entirely spurn Russia without exposing the hollowness of the “no limits” partnership and raising inconvenient questions among its own people. Russia will become even more dependent on China, but this will be as much, or perhaps even more, a liability than an asset for Beijing.

Putin miscalculated, and China followed him down a strategic dead-end with no easy exit.

China is now walking a fine and precarious line. The U.S. and Europe will not cut China any slack in implementing sanctions against Russia. China is Russia’s largest trading partner. But Western markets are far more important to China than Russia, and will remain so for the foreseeable future.

China’s efforts to become more self-reliant in key technologies or to rely more on domestic household consumption to drive growth, will not show significant results for a long time, if ever.

The Chinese and Western systems have bifurcated in some domains and we can expect more bifurcation, particularly in domains with security implications. But across-the-board separation of China’s economy from the rest of the world such as occurred between the U.S. and the Soviet Union is highly improbable.

China’s economic relations with every country will be closely scrutinised on two counts: U.S.-China relations, and also for compliance with Russia sanctions. This is something we in Singapore should bear in mind. Maintaining close defence and security relations with the West while having close economic ties with China is not impossible, but will become more complicated and will require greater alertness and agility from governments and businesses.

How does Russia’s invasion affect China’s plans towards Taiwan?

A few words about Taiwan: the argument that China will take advantage of U.S. distraction over Ukraine to attack Taiwan is just silly. The U.S. is not all that distracted and there is a strong bipartisan consensus on competition with China and growing sympathy and support for Taiwan.

Taiwan is a more important economy than Ukraine and a crucial node in the global supply-chain of semi-conductors. Failure to defend Taiwan will loosen and ultimately dissolve U.S. alliances with Japan, South Korea and Australia. Conversely, if America defends Taiwan, it will be very difficult for these American allies, in particular Japan, to stay aloof.

Beijing understands these fundamental differences between Ukraine and Taiwan. Chinese leaders are not going to confuse the two issues. A more resolute West must give China pause on Taiwan, as must the poor performance of Russia’s military and the strong international response to aggression.

Singapore must defend its own interests

A final word on Singapore’s interests. A line that I observe is beginning to be propagated, I think deliberately, is that as a small country, Singapore should not take sides. This is a pernicious and dangerous argument that seeks to instil a fatalistic sense of helplessness in small countries.

The norm of international behaviour that is at stake in Ukraine is of existential importance to small countries: that it is wrong for big countries to try to subjugate small countries by naked force and that there will be costs to such aggression.

Is it so difficult to understand why this is crucially important to Singapore? In defending this norm, the only ‘side’ we are taking is our own side, in our own interest.

Singapore exists because in the very dire circumstances that we found ourselves after Aug. 9, 1965, our people and leaders refused to accept that we were helpless. If we lose the will and courage to do what we can to support our own interests, our future will indeed be very bleak.

LONDON: I killed a man last night. I shot him three times. I aimed for…