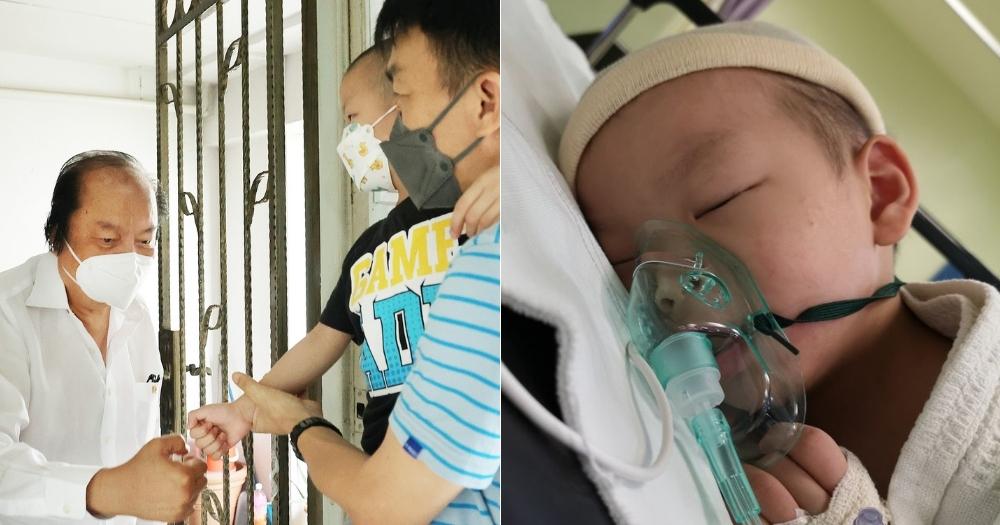 The Indonesian magnate is the founder of Mayapada group and has a net worth of USD 2.6 billion (S$3.5 billion), according to Forbes Indonesia.

Ang, who has a grandson of his own, was moved

Ang, whose youngest grandson is 4 years old, said he was moved after he saw the article and decided to personally visit the boy, Isaac Ng, and his father, Ng Nai Long, since he was in Singapore at the time.

He said: “Yesterday, I looked at your pictures, [and] immediately I responded.”

Dressed in a white button down long sleeve shirt and black pants, Ang appeared at the doorstep of Ng’s residence in Singapore.

Greeted at the door by Ng and his father, Ang remarked to Ng: “You’re like my grandson.”

While seated at a table, Ang pulled out a cheque from his black wallet and handed the S$100,000 cheque to Ng’s father.

He told Ng’s father not to worry and focus on nursing Ng back to health, and reassured him multiple times by saying: “I’ll bear the rest of the expenses. You don’t have to worry, let me settle.”

Ng’s father appeared lost for words towards Ang’s generosity, and placed his hands together in gratitude while thanking Ang.

Ang also encouraged Ng and said: “Grandpa will help you so that you can live a strong life after your recovery.”

He added: “You will definitely be a good person, one that is more capable than me.”

Speaking to SMDN’s reporters again after Ang’s visit, Ng’s father said he received a call from Ang on Mar. 5, who asked how his son was doing.

While the older Ng said Ang had asked for their address in the phone call, he never expected Ang to personally appear, and certainly not with a S$100,000 cheque in hand.

Ng’s father said he now has a weight lifted off his chest and can finally focus on his son’s treatment and recovery after Ang’s donation.

Ng was three when he was diagnosed

Ng was three years old when he was diagnosed with Acute Lymphoblastic Leukaemia in 2019.

Back then, Ng was admitted to the hospital for persistent bruises on his face and a high fever.

He was subsequently treated at University Malaya Medical Centre in Kuala Lumpur, and responded positively to chemotherapy.

However, Ng suffered a bone marrow relapse 13 months later, despite his prognosis of a high chance of recovery.

By mid-2021, the medical team attending to Ng said there were no more treatment options in Malaysia for him, due to the highly aggressive nature of his leukaemia cells, which were very resistant to chemotherapy.

Ng’s leukaemia too aggressive and resistant to therapies

This led Ng’s parents to seek alternative medical treatments overseas, when they learnt of a treatment called Chimeric-Antigen Receptor T-cell (CAR-T) therapy that was available across the border in Singapore.

Ng was referred to National University Hospital Singapore (NUHS), and his parents started a fundraiser for his treatment. The expenses then were estimated to be around S$180,000, including hospitalisation.

Unfortunately, a month after Ng started his CAR-T therapy in end December 2021, tests showed that he was losing the CAR-T cells that were supposed to help detect and fight cancer cells long-term, and that he was at an extremely high risk of relapsing.

It was then crucial that Ng receive a bone marrow transplant immediately, but there were no suitable donors globally.

Fortunately, Ng’s father was found to be a suitable donor for an alternative procedure called haploidentical (half-matched) stem cell transplant.

However, Ng’s parents were once again bogged down by the astronomical medical costs, estimated to be around S$350,000 this time around.

According to Ng’s Give.asia page, his parents tried to look for alternatives, including returning to Malaysia for treatment.

But time was of the essence, and the pair could not afford any delays as Ng needed the transplant immediately.

The pair once again took to Give.asia to appeal to members of the public and raise funds for their son’s medical expenses.

Ang is a philantrophist

While Ng’s father said that the young boy was not fully aware of what happened so far, he said that Ng gifted Ang a picture of Doraemon which he coloured himself as a way of conveying his gratitude towards Ang’s generosity.

This is not Ang’s first act of charity, as noted by SMDN.

Ang told the Chinese daily’s reporters that he had responded to a couple’s request for monetary assistance around six years ago.

The couple waited for Ang below his office with their six-month-old daughter in tow. The toddler was suffering from thalassemia and needed funds for chemotherapy and bone transplant.

Ang said he paid for the toddler’s medical expenses in full, which cost over S$350,000.

The billionaire philantrophist had also previously donated US$100 million (S$136 million) towards the global prevention of HIV, malaria and tuberculosis through the Bill & Melinda Gates Foundation in 2013, according to Tatler Asia.

Sharing his philosophy for helping others to SMDN’s reporters, Ang: “You heal your own diseases when you heal other people’s diseases.”

“I do not own wealth, but only manage wealth,” said the humble Indonesian billionaire, who added that it was God’s grace that gave him the opportunity to help others.

Some unrelated stories you should check out