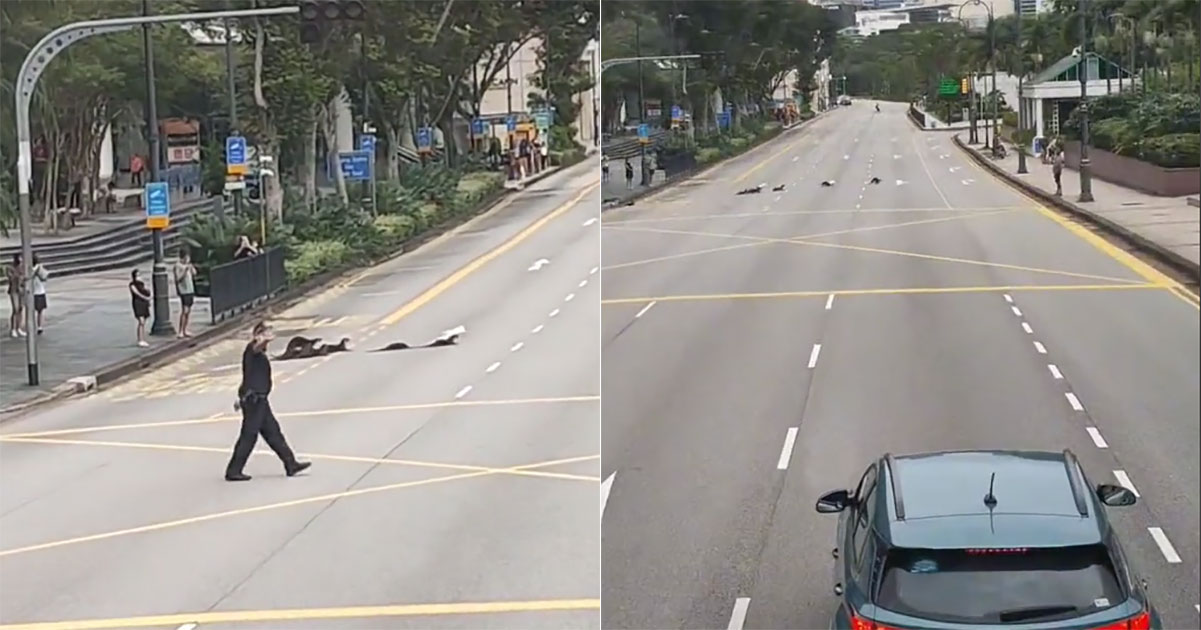 Istana police guards on sentry duty stopped traffic for about 2 minutes to escort and allow a family of up to 16 otters cross the busy Orchard Road safely.

The incident was caught on video and put up on TikTok on March 10.

The video, with accompanying background music, has been sped up, meaning the sequence of events took much longer to unfold in real life than when replayed on screen.

The video, shot by a commuter on a double decker bus, showed a family of otters outside the main Istana gate waiting to cross the road.

Instead of letting the animals chance it and risk becoming roadkill or causing a collision, the Istana police guards on sentry duty turned the traffic light red, which they have the means to do so.

They would usually manage traffic at the main gate when vehicles exit from the Istana compound.

In this case, the VIPs were the family of up to 16 otters.

Motorists were seen formed up at the traffic light, and even continued to do so after the lights turned green.

This was so as the entire family of otters were still making their way across the five-lane road.

Guard stood in middle of road to hold off traffic

When about a minute had past but the otters were still not safely across, one of the guards stood in the middle of the third lane and held his hand up to seek motorists’ patience.

As the otters were making their way across the five lanes in small groups, they stopped periodically in a crouching stance, as if taking stock of how many of them had made it.

The final otter, which was all alone at the end, then caught up with the rest — and stole some of the limelight for its tardiness.

The video also showed the otters being ushered by otter watchers on the other side, who appeared mindful to guide but not intervene too much.

In January 2021, a family of otters were almost run over by a taxi along the same road.

There were no wardens regulating vehicles at that time and the otters made a mad dash across the road as traffic continued to flow freely.