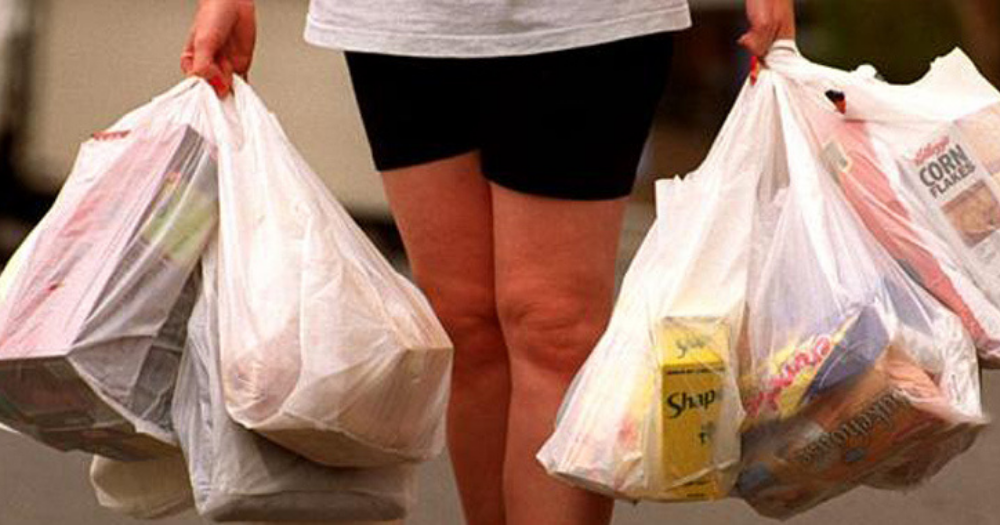 In 2023, major supermarkets in Singapore will charge a minimum of five cents for each disposable carrier bag.

Despite being an everyday convenience, Fu explained that disposables create large amounts of waste and use up finite resources.

As such, a citizen work group was convened in September 2020 to come up with recommendations on ways to reduce the use of disposables in Singapore.

One recommendation was to implement a plastic bag charge at supermarkets.

It was decided that a minimum charge of five cents per bag would be implemented at supermarkets, Fu announced in Parliament on Mar. 7. This will be applicable to all disposable carrier bags.

Fu shared that the minimum charge was kept low to moderate the cost effect on shoppers, including low income households.

Implemented at two-thirds of supermarket outlets in Singapore

“Charging per bag is equitable and effective. The more bags we take, the higher the amount we pay. Charging from the first bag would also encourage shoppers to bring their own bags from the outset.”

The bag charge will take effect from mid-2023, and will apply to operators of Singapore Food Agency-licensed supermarkets with an annual turnover of more than S$100 million.

This is equivalent to around two-thirds of all supermarket outlets in Singapore.

The charge will apply to large supermarket operators, and will not be extended to smaller convenience stores for now, Fu said.

Fu revealed that during consultations, there were concerns that supermarket operators could profiteer from the charge.

Operators are thus encouraged to channel the proceeds from the charge to environmental or social causes, and consider initiatives to support lower income families.

To ensure accountability, supermarket operators will be required to publish information on the number of bags issued, the amount of proceeds collected from the bag charge, and how these proceeds will be used.

Carrier bag charge is “not a ban”

Fu acknowledged public concerns about a carrier bag charge — that plastic bags are used by many households to bag trash — and said that they were “valid”.

As Singapore incinerates most of its trash, it does not face the same land and water pollution issues other countries are plagued by.

An increasing number of retailers have also voluntarily implemented plastic bag charges. One example is FairPrice, whose initiative saved over 30 million plastic bags in two years.

Fu added that the government “did not decide on this lightly”, and had only come to this decision to implement a bag charge after “careful deliberation”.

“By making the cost of the bag visible to consumers, the intent of the bag charge is to nudge people to consider what they really need instead of taking bags freely,” Fu said.

She also emphasised that the bag charge is not a ban, but something to help people develop more eco-friendly habits.

“The charge is not a ban, it will not remove the public’s access to disposable bags. It is a nudge to every one of us to develop a habit of bringing a reusable bag when shopping for groceries and more and to reduce the use of disposable and essential feature of sustainable living.”