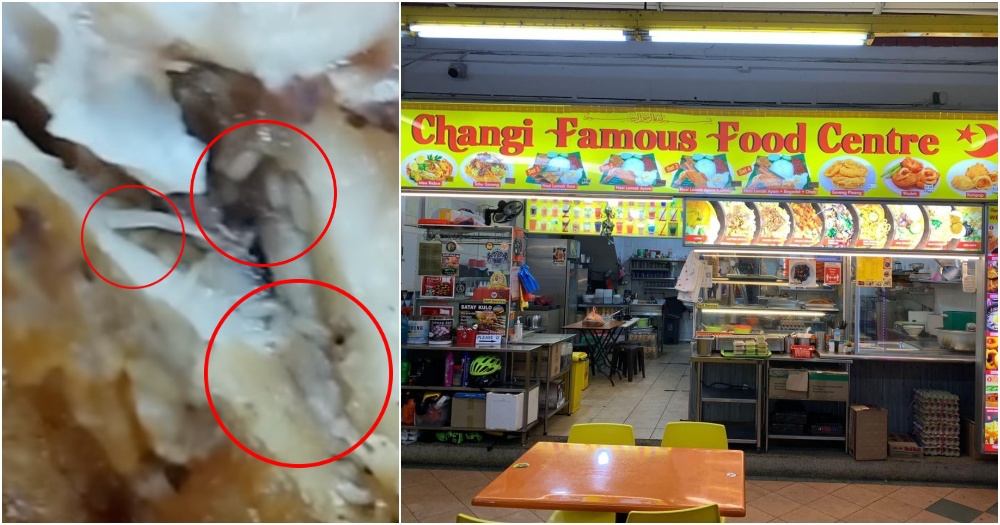 One man in Singapore wanted a hearty breakfast at an eatery located along Changi Village Road, but ended up throwing up.

In a Facebook post on Saturday (Mar. 12), Irvin Yio shared that he had gone to Changi Famous Food Centre with his friends at around 4:30am to have breakfast.

They ordered a nasi lemak set with ayam and otah (spicy fish cake) that cost S$5.

Maggots in the chicken

However, when their food arrived, Yio said that the cucumber and otah were “dry as f*ck”.

Unfortunately for him, that wasn’t the worst part.

After Yio took a bite of the chicken, which he described as hard and oddly-coloured, he found that there were maggots inside it.

Yio claimed he and his friends subsequently vomited in front of the eatery’s staff member.

According to Coconuts Singapore, Yio’s friends had already “gobbled down” their food before they spotted the maggots.

In his Facebook post, Yio said he found the staff member was “sleeping comfortably on his foldable chair” when he approached the stall.

“Did he even bother to look if any house fly or insects have come to any contact with the food on the tray?” Yio wrote.

He added that he has reported the matter to the Singapore Food Agency (SFA).

“I hope this terrible experience of mine can allow others to be wary of what they are eating in certain stalls and not fall victim like how my friends and I did. I am avoiding fried chicken for a while thank you very much!”

Asked for a refund

Yio told Coconuts Singapore that the stall did not handle the situation until he instructed the staff member to throw all the remaining food away.

Yio had also asked for a refund, and the stall’s staff agreed to return his money back after being told to do so.