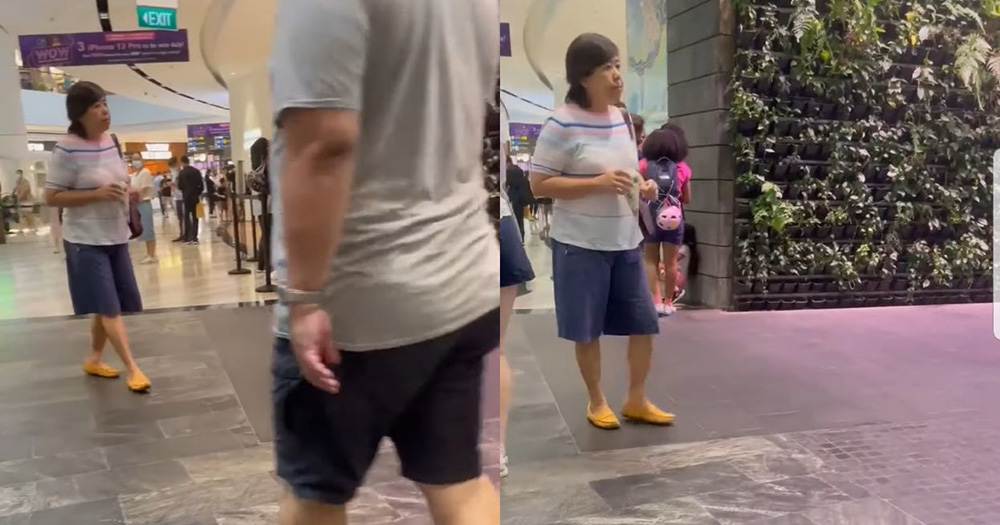 Phoon Chiu Yoke, also known as the MBS Badge Lady, has been out and about in Singapore — without her mask on again.

Despite her notoriety for going maskless in public when wearing one is still mandatory in Singapore, she appears to have little qualms being seen by others who are aware of her past antics that put her in jail for 16 weeks.

In a new video submitted to Mothership by a reader, Phoon was seen in public unmasked and walking around Jewel Changi Airport on March 12 at about 4.26PM.

However, she was seen holding an item in hand, which appeared to be food, and that provided her with some cover for not wearing a mask as she could have been eating.

Lowering mask to eat a common sight in public

Lowering or removing one’s mask to eat while out in public has become increasingly common, as the public grows comfortable with living with endemic Covid-19.

However, Phoon’s actions get scrutinised as she has been formally dealt with by the law for not wearing her mask, and was only lately seen along Orchard Road walking around maskless.

Her actions were called out as either stubborn or showing that she is sticking to her principles of being an anti-masker.

In her Instagram Story on March 7, Xiaxue said she had first approached Phoon in Orchard to ask if she was the “Badge Lady”.

In response, Phoon reportedly glared at her and walked away.

However, a maskless Phoon walked past the influencer again half an hour later.

The Singapore Tourism Board (STB) is currently investigating Phoon over this incident.

Phoon, a former naval officer, became the talk of the town in May 2021 after refusing to wear a mask at Marina Bay Sands (MBS).

She grilled a Safe Distancing Ambassador (SDA) and another staff member, “Do you have a badge? Can you put on a badge? If you have no badge why are you asking me to do something? Who are you representing?”

The public later learnt that Phoon had already been summoned to court for not wearing a mask at Newton hawker centre during the circuit breaker period on May 8, 2020.

She would go on to commit multiple Covid-19 breaches over the next year or so, including the incident at MBS.

Phoon also had her S$12,000 bail revoked in July 2021 after failing to wear a mask in public again while already facing similar charges.

She was sentenced to 16 weeks in prison on Sep. 6, 2021 after pleading guilty to nine charges of breaching Covid-19 safe distancing measures.