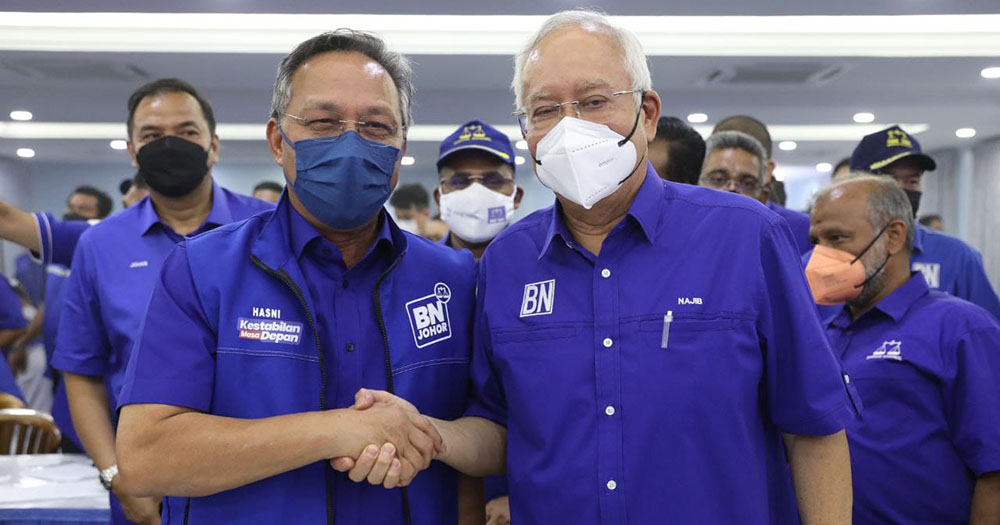 According to results on the website of Malaysia’s Election Commission, BN won 40 out of 56 seats in the state assembly, followed by Pakatan Harapan (PH) at 11, and Perikatan Nasional (PN) at three, while Parti Keadilan Rakyat and the Malaysian United Democratic Alliance (MUDA) each secured a single seat.

Zahid added that the results were beyond BN’s expectations and that it was a gift for Johoreans.

Speaking at a press conference that was held just after the release of the unofficial results on Feb. 12, Zahid was quoted as saying:

“Even though officially our elections director is Mohamad Hasan, our main campaign manager is Najib. Even though he (Najib) faced relentless attacks, even though he was slandered as high as the mountains, his unwavering spirit remains.”

During the election, Najib had campaigned for BN throughout the state, particularly in areas that were held by the DAP.

In response to criticism by other parties over his appearances despite being convicted of corruption, Najib said that he was being used as a “punching bag,” The Star reported.

“I am only helping Barisan to win the mandate from the Johoreans, the land where my mother was born,” he said.

The election had been triggered in January by Hasni, who had sought the dissolution of the state assembly, following the death of the former Menteri Besar, Osman Sapian, who was also the assemblyman for Kempas under Parti Peinumi Bersatu Malaysia (Bersatu).

According to Hasni, the state election was an important precondition to enable progress as a stable and strong government is required to allow economic development and investments to continue, The Malay Mail reported.

At his victory speech, he was quoted as saying:

“I am aware that Johoreans want prosperity as they are fed up with the political turmoil and want (political) stability. With the mandate given, I will carry out the reforms needed.”

Hasni also thanked Najib’s campaigning efforts, adding, “I may be BN’s ‘Poster Boy’ for the state elections, but Datuk Seri Najib is definitely the ‘Picture Boy’.”