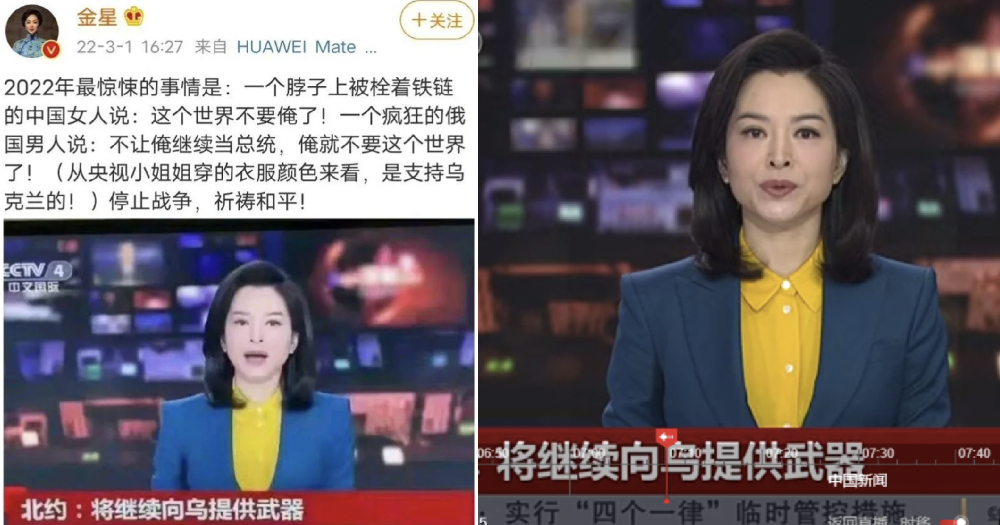 A news anchor reporting on Chinese state broadcaster CCTV donned an outfit that coincidentally or not, matched the colours of the Ukrainian flag.

This sparked rampant speculation among internet users both in China and overseas about whether the outfit choice had a deeper, hidden motive.

A Weibo user, in a Mar. 1 post, claimed that the news anchor stands with Ukraine, judging from the blue and yellow colours of the outfit she was wearing, which apparently look similar to the colours of the Ukrainian flag.

In addition, the Weibo user insinuated that Russian President Vladimir Putin was a “crazy man” to have started the war.

However, just a day later, the post could no longer be found on her page, with the user claiming that it had been removed by the popular social media platform.

“I didn’t remove the post myself, it was censored by the system! Idiots who want to scold me please verify your actual identity on your Weibo account first before doing so! Express (my) personal views, respect all lives, resolutely oppose war!!!”

Comments on the post could not be seen as well due to Weibo’s censorship controls.

The post had set off speculations among internet users who wondered if the outfit choice was a deliberate move by the news anchor to show her personal support for Ukraine.

At the time, she had been reporting on the supply of weapons from NATO to Ukraine to help in its self-defence, which suggested that NATO is to blame for Russia’s unilateral invasion.

However, a screenshot of the same programme provided by a user on public forum Reddit showed that the blue colour of the news anchor’s outfit was actually a lot darker than the picture that was first posted.

This shade of blue is darker than the one on Ukraine’s flag. 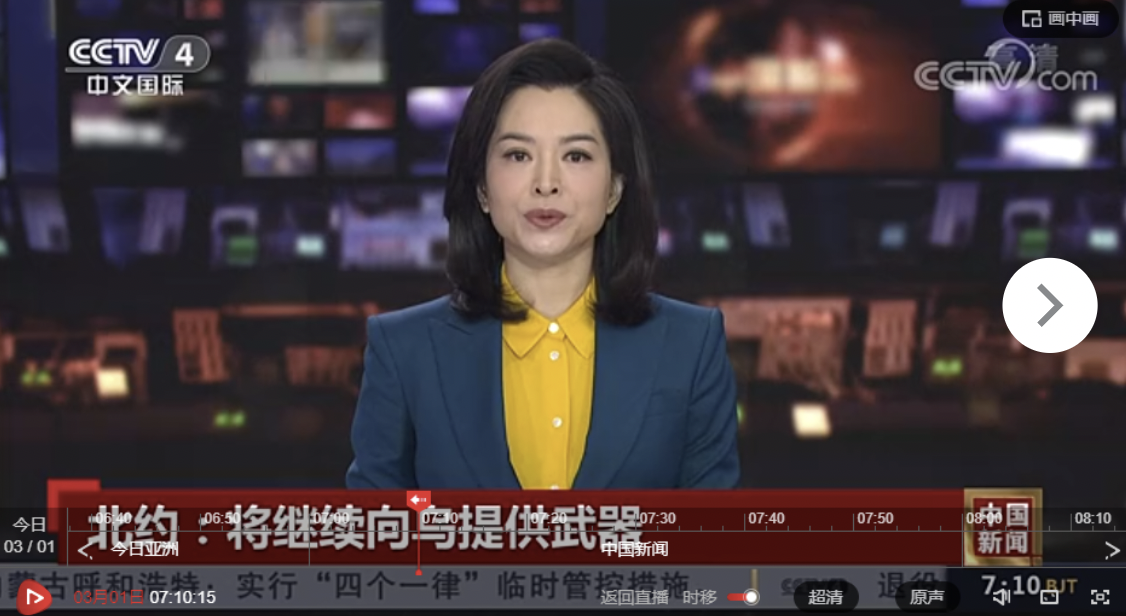 This set off another round of debate as to whether the colours had appeared different for the Weibo user on her screen.

Here’s another screenshot supplied by another Chinese Weibo user, who blasted the original poster for “photoshopping” the picture, Taiwanese media SETN reported. 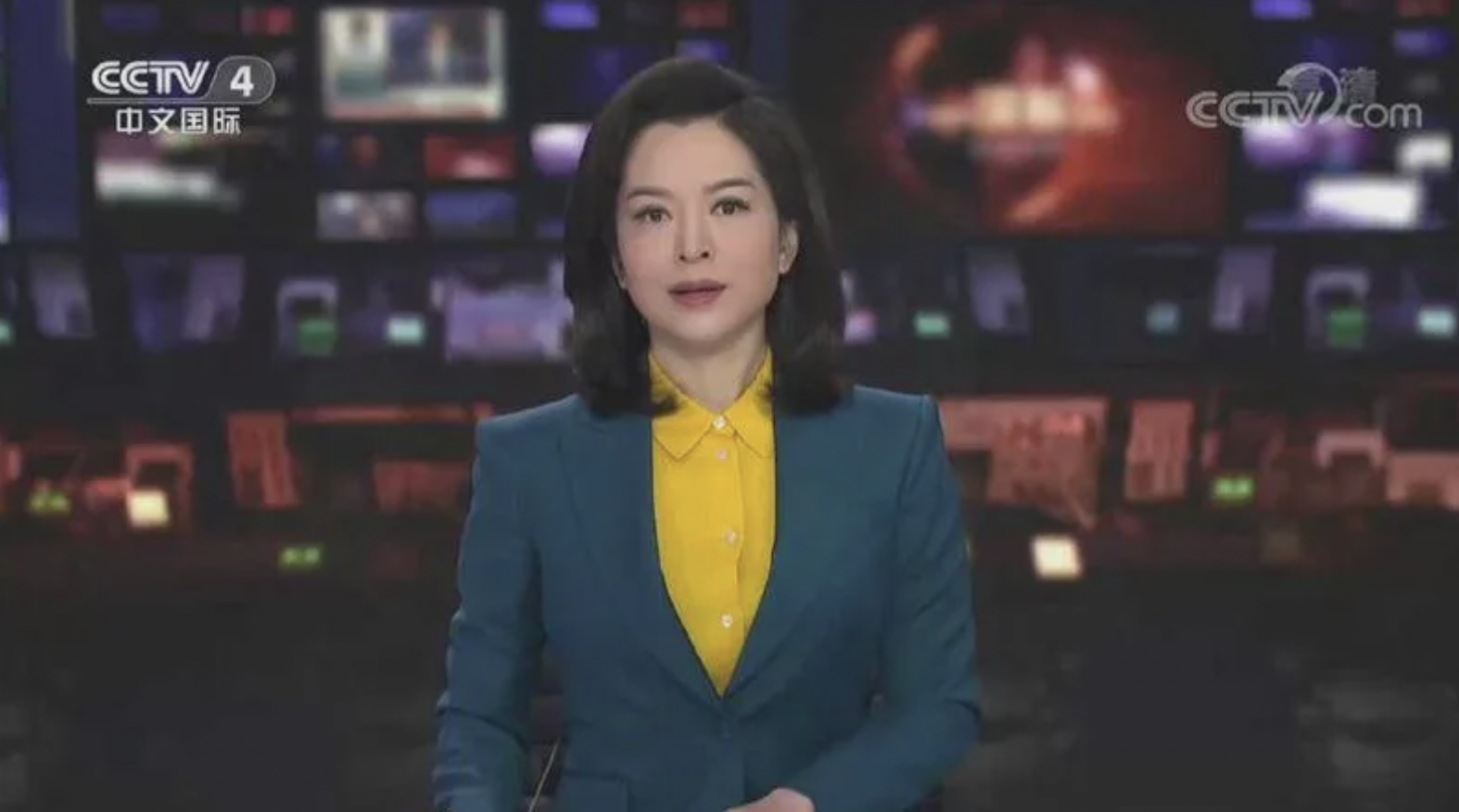 Regardless of the actual shade of blue or yellow on the news anchor’s outfit, or whether it was a deliberate choice or just a pure coincidence, the post had caught the attention of social media users due to the vague position China has taken with regards to the Russian invasion of Ukraine.

The fact that CCTV is a state-owned broadcaster, which had even reported on inaccurate news in the past to supposedly be in line with the Chinese Communist Party’s position or political agenda, puzzled people further.

Although China has reiterated the importance of the respect of state sovereignty and territorial integrity, it has stopped short of condemning Russia for its actions, instead calling for restraint on both sides and for them to negotiate peacefully.

China has also refrained from using the word “invasion” to describe Russia’s attacks on Ukraine, despite it abstaining from a United Nations Security Council vote condemning Russia’s attack on Ukraine — seen as a slight win by the West, which had expected Beijing to join its ally, Moscow, in voting against the motion.

Posts and comments expressing sympathy towards Ukraine have also been censored on Chinese social media — in a sign of China’s reluctance to break ranks with Russia — including an open letter signed by five prominent university professors that condemned Russia for its actions.

Chinese government has made changes over the course of the war

Nevertheless, in the wake of incendiary remarks from Chinese social media users supporting Russia and putting down Ukraine, which had stirred displeasure among the Ukrainians and led to a rise in harassment of Chinese nationals in Ukraine, the Chinese government reportedly started to remove such comments and call on its citizens to talk about the situation in a “rational” manner. They also cautioned Chinese nationals in Ukraine to avoid disputes with the locals and not to display “identifying signs”.

Previously, leaked instructions from a Chinese news outlet to its reporters on how to cover the Ukraine crisis had also revealed that China does not want to be seen as “anti-Russia” or “pro-West”.

These underline the fine line that Beijing finds itself walking at the moment, between standing with its Russian ally against a Western-led world order, and not coming off as endorsing the invasion.