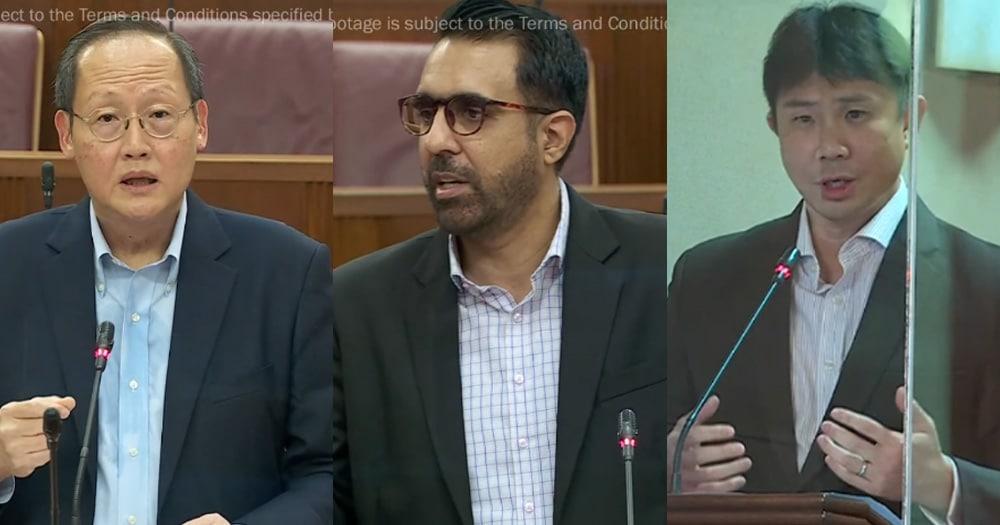 Minister for Manpower Tan See Leng responded to the Workers’ Party’s (WP) opposition to the GST hike by labelling their alternative suggestions to raise revenue through higher income and property taxes as a “punitive load”.

“I believe their position is agree with all the good, all the nice things that we propose, and then say not enough, ask for more,” said Tan during the Mar. 1 Budget debates, adding:

“What they oppose is how we intend to do the difficult thing, and that is to raise the revenues to pay for all the good things that they like so much that they want even more.”

Tan said this was a fundamental philosophical difference in the approaches of the two parties.

In the ensuing back and forth, Leader of the Opposition Pritam Singh of the WP said the minister had cherry-picked portions of the party’s proposals for criticism without looking at the suggestions as a whole.

Is it viable to load revenue shortfall on those just at the very top?

Tan had argued that forgoing the GST increase would result in a revenue shortfall of S$3.5 billion and questioned the viability of making up the shortfall through “loading it on those just at the very top”.

He insisted that while the Government’s “mantra” was for the “rich” to “carry a heavier load”, there is a difference between what constitutes a “fair load” and what is a “punitive load”.

Of the WP’s proposals to increase income and property tax rates more:

“If we were to do that, we will have to raise the tax rates on income and property even more and we have to make more people, including middle-income earners, pay more.

It will ultimately result in a system where our approach to revenue is just to squeeze anyone who does well, from the middle income upwards potentially.”

Such consequences, Tan said, would stifle notions of social mobility.

Previously on Feb. 28, Singh shared that the WP supports the Budget’s call for moving toward a fairer, more sustainable, and more inclusive society, but disagreed with the decision to raise the GST.

He had described the GST as a regressive tax that “hits lower-income earners harder”, and said that there is still anxiety over future price rises despite the government’s efforts to offset these through the Assurance Package.

Some of the alternatives to the GST hike that the WP had proposed include GST exemptions on essential items and imposing additional taxes on multinational corporations and the wealthiest in Singapore.

Responding to Tan’s jabs, Singh said that the WP was instead seeking a “more equitable tax distribution amongst various segments of society”, and as such, believed that the party was “fully entitled to raise alternate forms of revenue”.

“How do you balance things in a manner which is more equitable for society going forward, for a fairer, more sustainable, and more inclusive society?” he said.

“I also cannot understand why [Tan] is baffled because it would be in the course of this debate that the Workers’ Party would propose alternate revenue sources, and you’ve cherry picked some and criticised them.

I think you’re entitled to [do so], but if you look at the proposals holistically, you would understand that the Workers Party has put up alternatives for the rise in GST.”

Tan subsequently reiterated that with the WP’s proposals, the top 1 per cent to 5 per cent in the country could face a “very, very high, disproportionate burden”, and this was neither sustainable nor punitive.

He also warned that this would eventually affect the middle income as well.

In the meantime, he assured that the government’s policies on the GST hike have been implemented in a “very measured and a very calibrated approach”, and had been designed for “most people to be able to adjust and absorb” the changes.

WP MP Jamus Lim later rose to question Tan about the perceived “large philosophical difference” between WP’s alternative approach to raising revenue, in comparison to that of the government’s.

“I think it’s important to clarify that we’re not philosophically seeking a very narrow tax base,” he said.

Lim reiterated Singh’s point that Tan had not assessed the WP’s proposals holistically:

“If you look at the four levers that we described, only one of these, what we had called the wealth tax lever, actually approaches the high income, high net worth individuals.”

Acknowledging that wealth taxes would only bring in about S$1.2 billion in revenue, Lim said that the rest of the S$3.5 billion would be met by more broad-based forms of taxation.

Tan then returned to the lectern to ask if the WP, having heard the government’s explanation for the GST hike, now agreed with it, and if so, would they support the Budget.

He added that Finance Minister Lawrence Wong would address the WP’s points in his round up speech, to be delivered on Mar. 2.

In order to help alleviate the country’s shortage of chicken eggs, Agriculture and Food Security…