A man in Singapore claimed that he received a bag full of trash instead of the food he had ordered via delivery.

Zephyr Jun Xiang Ng shared on Facebook that he had placed an order for mala from Chuan Wei Mala Hot Pot in Choa Chu Kang.

This, he noted, was out of the norm, as orders typically took longer based on his past experience.

His meal cost S$19.48, and the delivery rider apparently left immediately after passing him the tied-up plastic bag.

Ng told Mothership that he noticed the bag felt “suspiciously lightweight”, and did not have the usual shape as it did not contain a takeaway container.

“I’m able to tell that this definitely isn’t what I ordered before opening up [the bag],” Ng said.

The white bag was apparently filled with used tissues, crumpled receipts and food wrappers. Ng claimed that there were cockroaches inside the bag as well.

Here are some photos he snapped.

Ng immediately threw the bag of trash away and washed his hands.

He added in his Facebook post that he “can’t even comprehend why the rider even picked up and deliver it”, and said it was “unhygienic and unethical”.

Ng apparently faced problems with his previous order from the same stall as well.

On Mar. 8, he shared on Facebook that he had ordered some mala but had received a “mysterious black soup” in lieu of his order.

He subsequently reached out to foodpanda about the incident. He received a refund for the S$23.48 he paid, and a S$2 voucher.

Ng explained to Mothership that he decided to give the mala stall another chance on Mar. 11 despite this incident, as he had frequently purchased from this stall in the past without any issues cropping up.

Following the incident on Mar. 11 where he received the bag of trash, Ng reached out to foodpanda as well.

He received the same compensation — a refund and a S$2 voucher. He was assured that something like this would not happen again.

foodpanda later sent him an email referring to the order completed on Mar. 11.

It was stated that foodpanda’s partner “may have accidentally prepared the wrong order”. The delivery company then apologised for the inconvenience.

While Ng lamented that the delivery rider did not check the order properly, he also maintained that the blame lay with the food stall.

“Doesn’t the rider care and check the order they took? Does it not occur to him that this doesn’t weigh like a normal food order, it’s literally a bag of rubbish. I don’t really blame the rider, the fault lies with the restaurant.”

Ng said that following these two incidents, he will not order from the mala stall again. On future foodpanda orders, he is also considering using the platform less, or selecting “self pick-up” options instead “to be safe that such things won’t happen again”.

On Mar. 12 at around 12:45pm, Chuan Wei Mala Hot Pot messaged Ng on Facebook to apologise for the incident involving the bag of trash.

They shared that this is the first time such an incident has occurred, and that they are conducting an internal investigation.

The stall stated that their orders are packed in a custom-made bag with their brand’s name and logo, unlike the bag the trash was in.

It is also “impractical” for their chef to prep an order filled with trash. As such, the stall said it “highly doubt[s]” the error was made by their chef.

Nevertheless, the stall has reported the issue to foodpanda, and apologised to Ng about the inconvenience caused.

Ng noted, however, that they did not address the incident about the “black soup”.

Chuan Wei Mala Hot Pot agreed with Ng that the short delivery time did not make sense, stating that it was “impossible” to prepare and deliver an order in the 26 minutes that elapsed from when Ng placed his order to when he received the bag of trash.

According to the stall, they have made a police report.

The stall also requested for Ng to take down his Facebook posts, as the posts might “mislead people”. 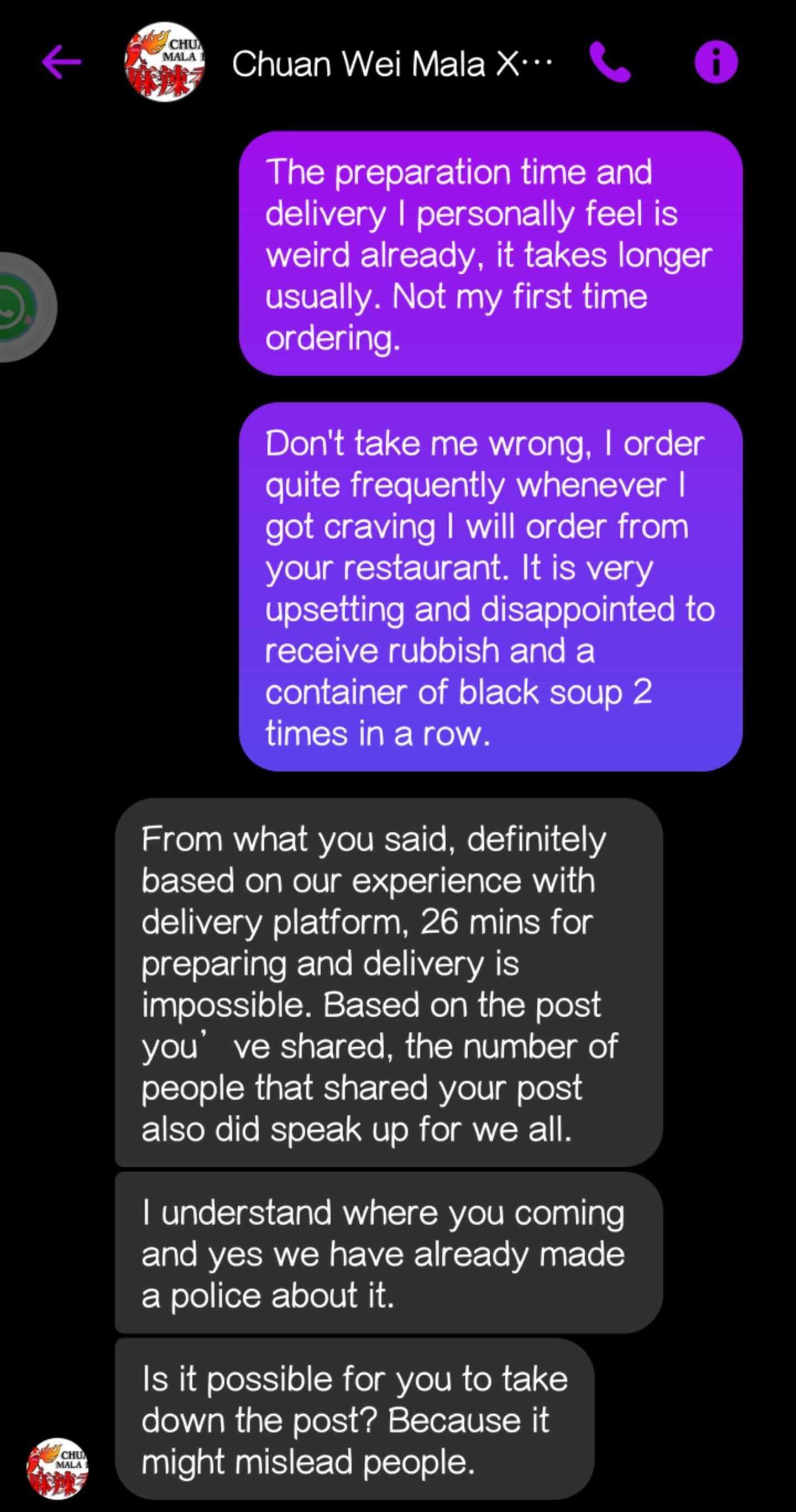 “We’ve contacted the customer and have processed a full refund for the order while we investigate the matter.”

Brazilian Amazon deforestation falls, but up 60% under Bolsonaro