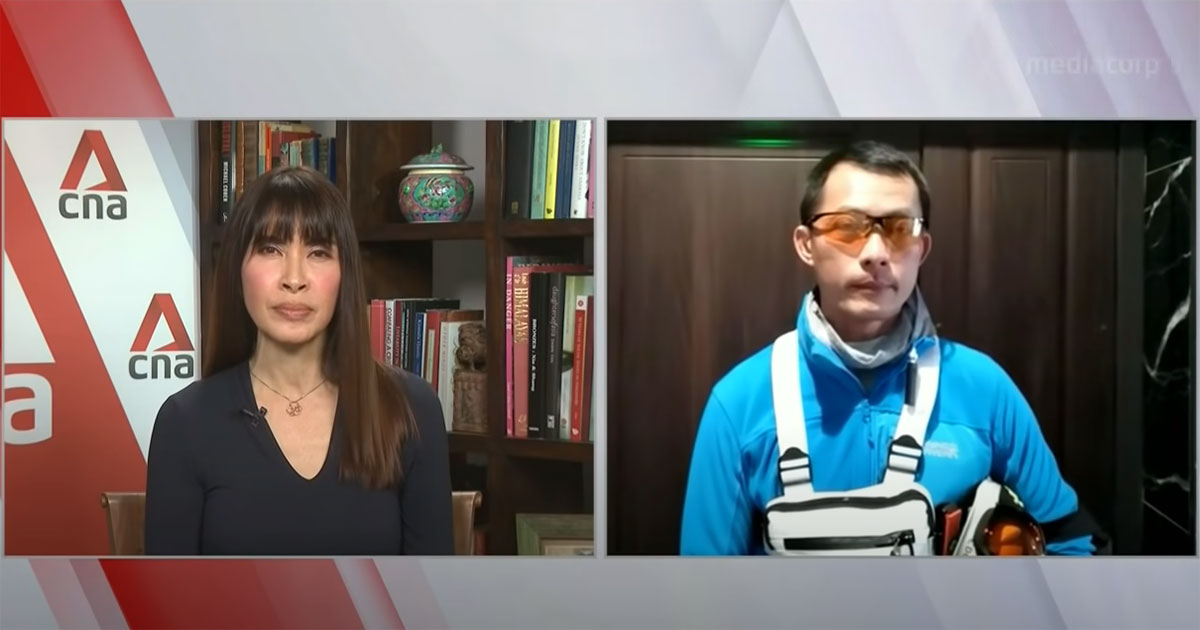 Ix Shen, 49, a Singaporean former actor with TCS, is staying put in Ukraine with his Ukrainian wife because leaving now is more dangerous with Russian airstrikes hitting residential areas in capital Kyiv, he told CNA, while reporting at the frontlines.

In the process of hunkering down and suiting up his survival gear, Shen, who is well-known to 1990s and early 2000s Singapore television audiences, has suddenly been thrust into the spotlight again to become the accidental and foremost war correspondent at the frontlines — a role that otherwise would not have been filled given the risks.

Snippets of Ukrainian life on the ground

Since the invasion started, Shen has been giving Singaporeans updates on how things are going via his social media platform, sans the mass media news filter — achieving an intimacy that is often almost lost despite the non-stop 24-hour wall of coverage.

Effectively bilingual on camera, he channels his screen presence honed from years of acting to give concise takes on Ukrainian life, speaking effortlessly in English and Mandarin to address his primarily Singaporean audience.

1 of 6 Singaporeans left in Ukraine

In the latest update on March 3, it was revealed that Shen is just one of six Singaporeans left in Ukraine, after three others were evacuated.

Shen then told CNA‘s Dawn Tan why he won’t be leaving Kyiv and how the children living through the war are doing.

The three-and-a-half-minute segment is simultaneously professional and personal, making it even more compelling and guilty to watch.

The audience, knowing too well that Shen has a personal and vested interest in Ukraine, are also aware he has to convey the realities on the ground without being dramatic or appearing resigned to fate.

While Shen is asked professionally on telly, “How is morale?” and “Are you going to leave?”, what the audience really wants to find out is how he really feels seeing a country he calls home destroyed, and what even made him leave Singapore in the first place.

But these questions can wait — too impolite and too much to ask in a time like this.

And with each passing day of the invasion without a ceasefire negotiated, the moment Shen stops appearing in live updates from Kyiv is when the rest of us watching from afar can start panicking.

Here is a transcript of the interview with questions truncated.

What emergency plans have you got in place?

We have been briefed to be fully alert the moment they raise the warning to evacuate our unit and go straight down to the bunker.

And essentially I have my emergency pack, my flashlight, it has my safety rope, some first aid kit, mask, helmet, goggles, hook knife — things to help anyone in need, should there be a situation.

But most of the time we have already done this on a daily basis, in fact, nightly basis, so often everybody knows the drill.

The moment they raise the alert, the bags are packed, shoes are worn, we just go straight to the bunker.

And we wait for the fighting to end.

And this is how life is starting to be for now.

How is your morale like, and how are the children doing there?

The children are the most affected, to be honest, because they might not fully comprehend what is going on but they definitely sense the tension of the environment.

We just hope they will not be overly traumatised after this episode.

For the adults, they will be the ones that have to shoulder stress from everyone else, and that’s why we stay as a community to rally support from everyone, to know that there is someone to help you… never be afraid to voice out that you need assistance.

And this is how we support each other.

Like I said before, until it stabilises and ceasefire situation can be established, evacuating right now actually provides more risks.

Like last night, there was two blasts that rattled the windows, fortunately, nothing was broken.

From social groups that we can see, something that I cannot verify, there was an attempted missile strike on the railway station.

My wife being Ukrainian, understand this is Psychological Warfare 101.

The purpose is to strike fear and panic.

But this is something the Ukrainians are not giving.