S’porean woman, 53, who stabbed herself at Tampines St 82, to plead guilty to carrying 2 knives in public 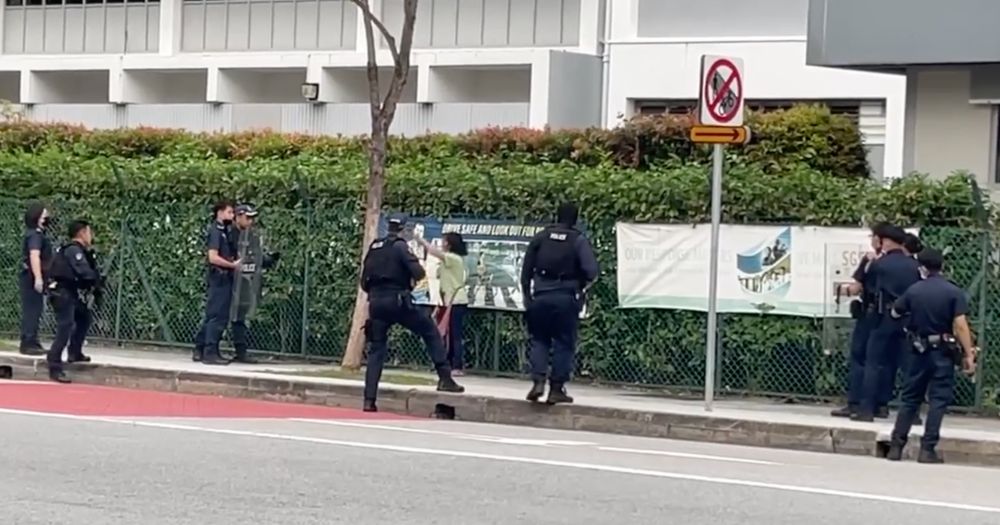 The 53-year-old woman, who stabbed herself in the abdomen outside St Hilda’s Secondary School at Tampines Street 82 on Sep. 19, is set to plead guilty to possessing offensive weapons while in public.

The Singapore Police Force (SPF) said in a previous statement that Juliana Binte Abdul Kadir was found with two knives during the incident.

One was a 21cm knife with a black and yellow handle and a 10cm blade, which she supposedly used to stab herself and threaten further self-harm, and brandished at police officers.

The other knife – a 13cm penknife blade with a portion wrapped in what appears to be tape – was recovered from Juliana’s bag.

Court documents stated that she was charged with the possession of two offensive weapons whilst in a public place on Sep. 21.

Juliana is out on bail and appeared in court on Dec. 7, where she was unrepresented.

Today reported that she intends to plead guilty to her charge.

If convicted, the offence carries a jail term of up to three years and at least six strokes of the cane.

However, women and individuals above 50 years old cannot be caned.

She is scheduled to return to court on Jan. 18 next year.

Juliana was involved in a standoff with several police officers outside St Hilda’s Secondary School at Tampines Street 82 at around 6:30pm on Sep. 19.

Multiple videos of the incident went viral on that evening, showing Juliana in a blood-soaked green shirt and negotiating with the police officers who surrounded her.

SPF said in their previous statement on Sep. 20 that Juliana apparently disregarded the officers’ instructions to put the knife down after she stabbed herself in the abdomen and threatened to harm herself further.

The police officers subsequently subdued her and apprehended under the Mental Health (Care and Treatment) Act.

She was then conveyed to Changi General Hospital in a conscious and stable condition.

Capitaland’s CEO of retail and workspace on today’s modern luxury approach: ‘Experience is what strings everything now’

CNA Correspondent – S1E25: Chinese New Year celebrations are back in full gear after the pandemic

Capitaland’s CEO of retail and workspace on today’s modern luxury approach: ‘Experience is what strings everything now’

Commentary: Family members should not have to bear burden of looking after dementia patients alone