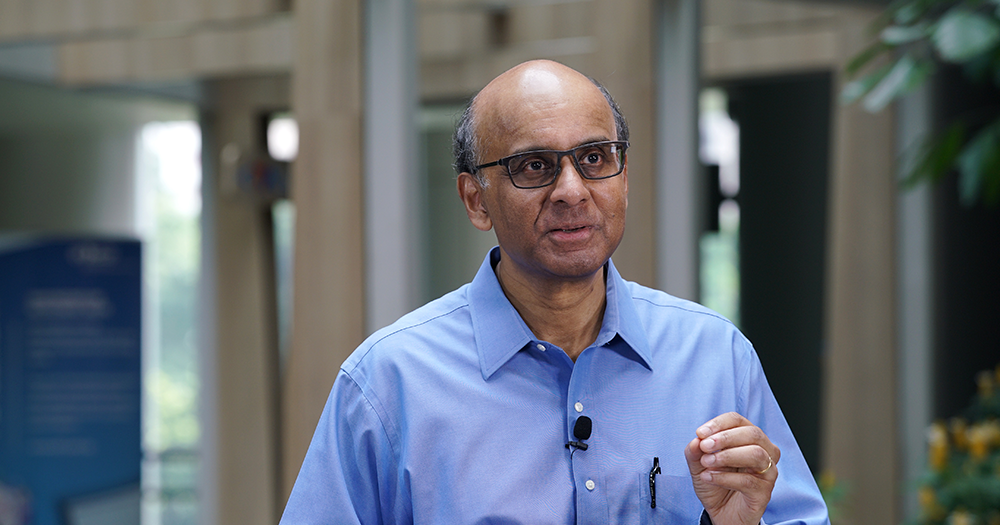 Speaking at the IMAS-Bloomberg Investment Conference, Tharman added that the current combination of risks and fragilities for investing in innovation and structural transformation is unprecedented in the last three quarters of a century.

“This time it’s not just oil prices, it’s food, it’s a range of industrial metals, it’s fertilisers and other commodities. The war and sanctions are also further disrupting supply chains that were beginning to recover after the last two years,” he said.

What exactly are these factors that constitute the “perfect long storm”?

Tharman highlighted the war in Ukraine as a “rupture” in the system of rules governing global stability, as well as the sovereignty and integrity of national states.

While the system was not perfect, “things were held in place,” he elaborated.

The war in Ukraine therefore means that the world is now entering a period of heightened and likely prolonged period of geopolitical instability.

In addition, the human costs are growing on a daily basis, along with the destruction of Ukraine’s infrastructure and economy.

Tharman added, “Depending on the outcome of the war, Ukraine can expect massive external support for reconstruction through the international institutions.”

As for Russia, its stature will be diminished, politically and economically.

Apart from sanctions, there is also an exodus of investors and indications of a desire in many younger Russians to emigrate, he said.

“The combination of weaker investments, weaker access to technologies and a brain drain is a powerful negative for any economy, and coming to an economy that was already weak for some time, the outlook is not good.”

For many countries, both advanced and developing, higher-for-longer inflation is now very likely, along with slower growth, Tharman noted.

This means the risk of stagflation is real, he said.

The minister elaborated that while inflation will not be regarded as the most serious problem, compared to the aforementioned rupture, even 20 to 30 years from now, it is not a trivial problem, given its social and political implications.

“Now you have a large part of the advanced world’s populations that are older. Middle aged workers tend to have wages that tend to stay flat, and a large part of the retiree population is on fixed nominal incomes. Five to six per cent inflation can be a very demoralising experience for populations and will complicate the task of governments to rally support for the types of initiatives, the taxes, the carbon pricing that is required to address the larger challenges we face.”

Here, Tharman pointed out that the war in Ukraine had brought into focus the fact that it is no longer possible to make the adjustments needed to tackle the climate crisis without ensuring energy security.

Tharman added, “We can’t be purist about this, because if sharply higher energy prices or disruptions threaten social and political stability, the world is not going to be able to address its longer-term challenge, which is our foremost challenge, of tackling climate change. ”

However, this means that efforts to make a longer term transition to cleaner energy and a sustainable future must also be redoubled, he said.

It is therefore crucial to have clear carbon tax and carbon pricing frameworks, to avoid the risk a sudden loss of energy security or loss of political capital, while encouraging and incentivising investments in sustainable energies.

On top of that, the climate crisis has also exacerbated the risks for recurring pandemics, as a result of global warming, the loss of biodiversity, deforestation, and increased human incursions into the natural world.

This has increased the spillover rate of pathogens from the animal world into human life.

“Omicron will not be the last variant in the current pandemic. And COVID-19 is not the last pandemic we’re going to see. We are in an age of recurring pandemics,” Tharman pointed out.

There must therefore be a global effort to invest in global public goods and help the world be better prepared for the next pandemic.

Such goods include the R&D of new vaccines, drugs and diagnostics, to strengthening surveillance systems, to developing manufacturing capacity so that the next time around, vaccines can be rolled out at a faster rate.

Apart from inflation and slower growth, the war will also accentuate the risks for developing countries, particularly the prospect of higher food, fertiliser and other commodity prices.

Tharman further noted that in 2008, a sharp increase in the prices of food resulted in the Arab Spring and subsequent major instabilities.

“These aren’t fanciful scenarios. That’s what happens. Social stability is affected and civil wars can erupt when food is scarce or priced out of reach,” he said.

Combined with geopolitical instability, and the fact that both pandemics and climate crisis will hit poor nations the hardest, the developing world will have greater difficulty in converging with the advanced world, he added.

“It will be a challenge for the world because it will have many ramifications, including forced mass migration, and we will be losing a major opportunity for global growth because the big opportunity has been in the developing world. So we all have to be concerned about that.”

But the situation is not hopeless

Tharman then brought up his next point that the situation is not hopeless.

The war in Ukraine, and what it represents, should provoke fresh thinking within the U.S. as to whether China is really its overriding security threat, he said, with relations between the two countries requiring a new understanding.

International institutions such as the IMF and World Bank, the WTO, the WHO and new global health mechanisms must also be fortified to prepare for pandemics.

Tharman also acknowledged that while there is currently no solution for the ongoing rupture to the global order, Russia’s invasion of Ukraine has energised supporters of an open, rules-based global order, one that preserves the sovereignty and territorial integrity of all nations.

SINGAPORE : A consortium of global energy and shipping organisations said on Tuesday it was…