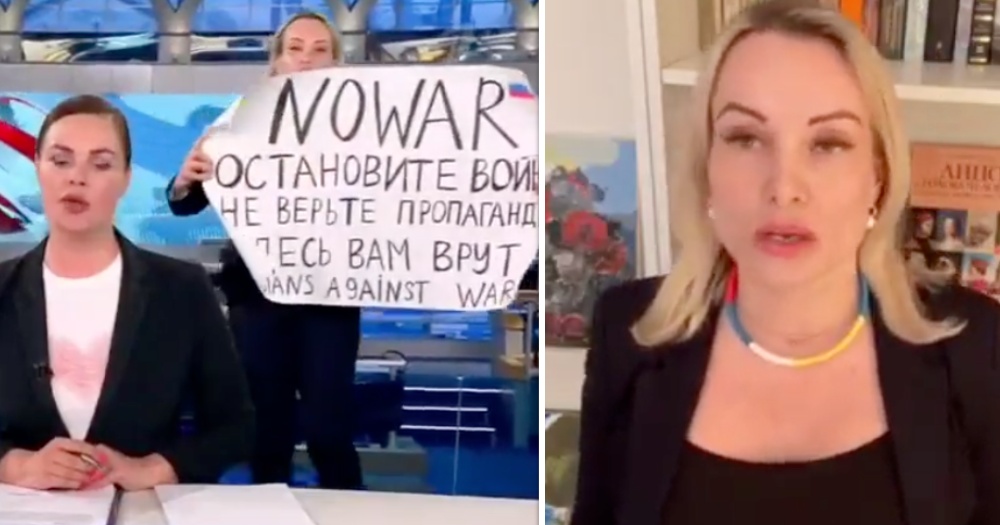 A Russian state tv news programme was interrupted when an employee rushed into the shot holding an anti-war sign.

Here is the clip:

This is fantastic. A brave woman interrupted Russian state TV’s live broadcast with a sign that says: “Stop the war. Don’t believe propaganda. They’re lying to you here.” It was signed: “Russians against war.”pic.twitter.com/673cO668nM

Her sign read: “Don’t believe the propaganda. They’re lying to you here”.

And then in English: “Russians against the war”.

Marina Ovsyannikova, an editor at the station, also shouted “Stop the war. No to war.” according to The Guardian.

The anchor can be seen trying to talk over Marina unsuccessfully before the broadcast cut away to a recorded segment.

Marina had also recorded a message before her broadcast protest.

Marina Ovsyannikova, the woman who ran onto a live state TV news broadcast, even recorded a message beforehand. In it, she says her father is Ukrainian. She calls for anti-war protests, says she’s ashamed about working for Kremlin propaganda, and she denounces the war absolutely. pic.twitter.com/nOpUY9bH74

In the video, she says her father is Ukrainian and that she was ashamed of how she had worked at the station for a “number of years” and how she had contributed to the “zombification of the Russian people”.

According to Buzzfeed News’ translation of the video, she ended her video with this:

“Now the whole world has turned away from us,” she said, “and the next 10 generations of our descendants won’t wash off the shame of this fratricidal war.”

“We are Russian people who think, who are smart. It’s only in our power to stop all this madness,” she concluded. “Go to protests. Don’t be afraid of anything. They can’t imprison us all.”

Zelensky personally and publicly thanks Marina Ovsyannikova for her brave protest today on Russian state TV. And he thanks all Russians laboring to speak the truth about the war. https://t.co/ocixyrleqM

According to The Guardian, Marina was arrested shortly after her protest.