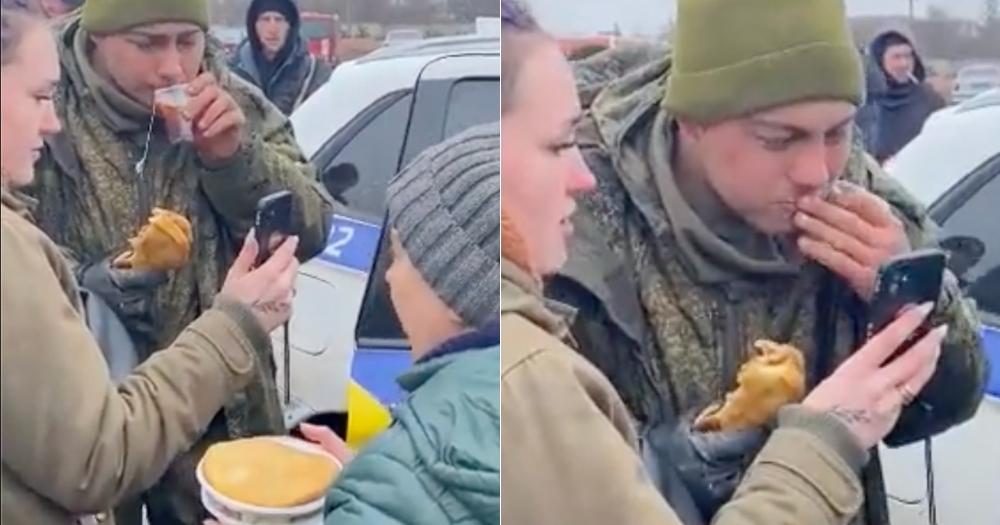 Ukrainians were seen offering food and hot tea to a young and lost Russian soldier in a video widely circulating on Twitter.

“He didn’t even know why he came here”

The Sun reported that the video was captioned: “Russian soldiers, surrender, Ukrainian people will feed you, just surrender.”

The clip was also uploaded onto Twitter by BuzzFeed News correspondent Christopher Miller.

In the video, a soldier said to be from Russia could be seen surrounded by what appeared to be a crowd of Ukrainian civilians.

According to New York Post, the Ukrainian civilians were on a video phone call with the Russian soldier’s mother, “Natasha”, who was communicating with a man speaking in Ukrainian off-camera, and the woman holding the phone.

The man told “Natasha” that her son does not even know why he is in Ukraine.

“This one (the Russian soldier) shouldn’t have ended up here,” said the man, who added that the young Russian soldier got lost because he was using old maps to navigate the unfamiliar territory.

He said: “They don’t know where they are going, they are simply wandering here.”

The man said Russia was using the children as “cannon fodder” – combatants who are regarded or treated as merely expendable in times of war.

He went on to make a case with Natasha, for her to do what she can to stop other young Russian soldiers, like her son, from leaving Russia and/ or entering Ukraine.

“Rise as a nation, block routes, roads bridges. Do everything to have your troops [of young soldiers] removed from here,” he said.

Him, and the purple-haired woman, reassured Natasha that her son is alive and safe, and promised nothing will happen to him.

Natasha can be heard asking how she can retrieve her son, to which the purple-haired woman replied and said she will be in contact with her later in the future.

Throughout the video, the stoic-faced young Russian soldier remained silent and kept busy by eating his food and drinking the hot tea, save for a few moments towards the end of the video where he can be seen holding back tears and trying to keep a lid on his emotions.

The engrossed manner that he was consuming his food has caught the attention of one Twitter user, who said he must have not “eaten in days”.

The way he is chugging down that tea and food it seems like he hasn’t eaten in days.

The Russian soldier was once again overcome with emotions as he blew a kiss over the call and bid the other party goodbye, before the end of the video phone call.

Here’s a video where the exchange has been transcribed into English subtitles:

Varying translations of the entire exchange has been uploaded onto Twitter as well.

The unverified video comes amidst several reports of Russian soldiers with expired field rations and limited supplies, bewildered and disarmed young men in Russian uniform, and another captured Russian soldier breaking down on a phone call with his mother.

According to Kyslytsya, the Russian soldier admitted to his mother that he was scared via texts, just moments before he was killed.

Separately, Ukraine has also issued a flyer asking the mothers of captured Russian soldiers to go to Ukraine and collect their sons.

“We ask you to deliver this message to the thousands of miserable Russian mothers, whose sons have been captured in Ukraine.”

“We, Ukrainian people, in contrast to Putin’s fascists do not make war with mothers and their captured sons,” the defence ministry said.