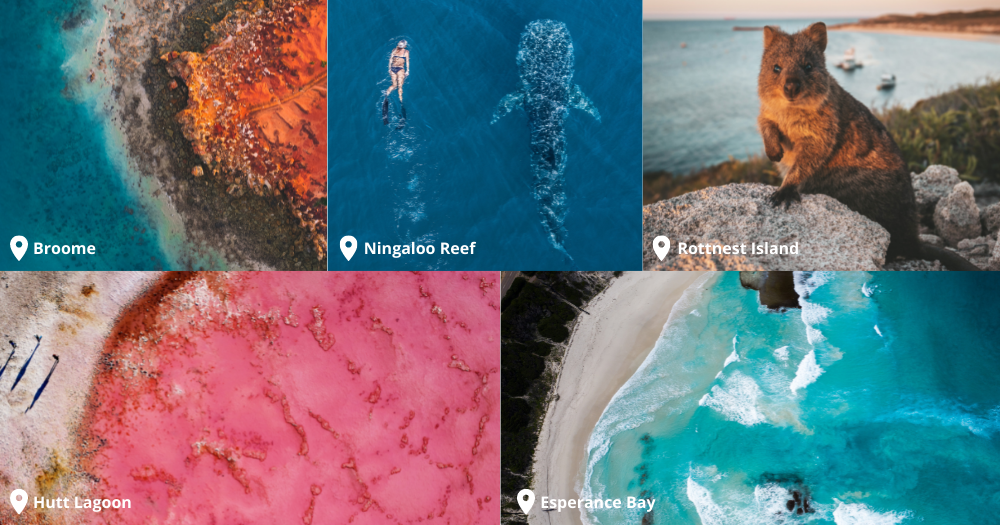 If you’re planning a trip to the Land Down Under, here’s something to feed your wanderlust and galvanise your senses.

10 scenic destinations in the land of road trips – Western Australia — making it the land of endless exploration.

You’ll begin with untouched wilderness in the North West and pristine beaches along the Coral Coast, before journeying down south to the wine valleys in Perth, vast naturaleza in the Golden Outback, and towering forests in the South West.

So sit back, listen to the accompanying Spotify playlist, and relax.

First up is a 375 million-year-old ecosystem.

The rocky cliffs that bound the meandering gorge were once part of an ancient coral reef, which means that you’ll get to see fossilised remains of ancient marine life along its walls.

Keep an eye out for birds, fruit bats, and freshwater crocodiles as well.

Consider exploring the Kimberley region – one of the world’s last wilderness frontiers – for multi-hued canyons, freshwater swimming holes, and even dinosaur footprints.

Broome offers a pop of colour and lots of character for an exceptional beach landscape.

You can almost hear the gentle murmur of waves crashing upon the shore.

And watch the sun go down on the famous camel trains that saunter along Cable Beach at sunset.

Next is Karijini, an arid landscape of deep gorges and jagged red peaks.

It covers a massive 627,422 hectares and is WA’s second-biggest national park.

Or hike your way over its vast rocky terrain.

Some of the best lookouts include Weano Gorge, Oxer and Junction Pool Lookouts, and Hancock Gorge.

Along the Coral Coast, dive with whale sharks and sea turtles in the deep blue waters of Ningaloo Reef.

It’s one of the world’s largest ocean paradises, with pristine waters that stretch for miles.

Go under to immerse in a world of calm, with close-ups of rare flora and fauna unlike anywhere else in the world.

Then, continue your journey, this time to the great outdoors at Kalbarri National Park.

Peer out one of WA’s most iconic attractions – Nature’s Window, a wind-eroded sandstone formation that frames the Murchison River and the earthy hues of red and white sandstone plains far down below.

For wine country, head to Swan Valley, just 25 minutes away from Perth.

It’s all about letting your hair down and savouring the moment — think row upon row of vineyards and endless glasses of reds and whites.

If the clink of wine glasses isn’t enough to get you in a tizzy, you’re also invited to chow down on an assortment of local produce from the region.

This includes handmade jam, bread, and freshly picked fruits such as grapes and figs.

Alternatively, escape to the Margaret River region for a regenerating wellness and yoga retreat – with all-inclusive experiences like sourdough making workshops and gin and wine tastings.

Back in the city, take your Carpe diem spirit to the next level with Perth’s newest adventure – the Matagarup Bridge Zip + Climb, across the expansive Swan River.

But what about the wildlife, you ask?

At Rottnest, take a selfie with one of the island’s native residents — the Quokka.

Get up close with the furry creatures, or check out the island’s 63 bays and sandy enclaves. If the lapping of waves doesn’t get you in a “holiday” mood, the cawing of seagulls overhead surely will.

Check out the island’s newest whale watching experience, organised by Rottnest Fast Ferries, for a whale of a time off the Sunset Coast.

At Esperance Bay, embrace the serenity of isolation, with untouched seascapes far from anyone else.

Walk down any of the wooden staircases in Esperance; idyllic beaches are a dime a dozen, and you can take the time to splash around in the region’s clear blue waters.

For some wellness and rejuvenation, embark on a four-day all inclusive yoga retreat at Esperance – to be surrounded by nothing but beaches and pristine coastlines.

The national park is only a 45-minute drive away from Esperance Bay.

Lounge around Lucky Bay, which is its whitest beach. With sand that’s so fine it’s smooth to the touch, even the kangaroos can’t resist hanging out there.

Finally, there’s Hutt Lagoon, with waters that turn a different shade of pink according to the seasons and time of day.

Visit when the sun hangs highest in the sky (some time between 10am-2pm) for its most vivid pink; its extremely high salinity is what gives it that unusual hue.

Whether you’re a travel greenhorn or a returning wildlife enthusiast, the great outdoor adventure awaits those who are looking to travel now that Australia’s borders are fully reopened.

The full reopening of Australia’s last state – Western Australia – is official as of Mar. 3.

Remember to bookmark this page so you can use it to plan for the road trip of a lifetime.

This sponsored article for Tourism Western Australia made this writer miss road trips.