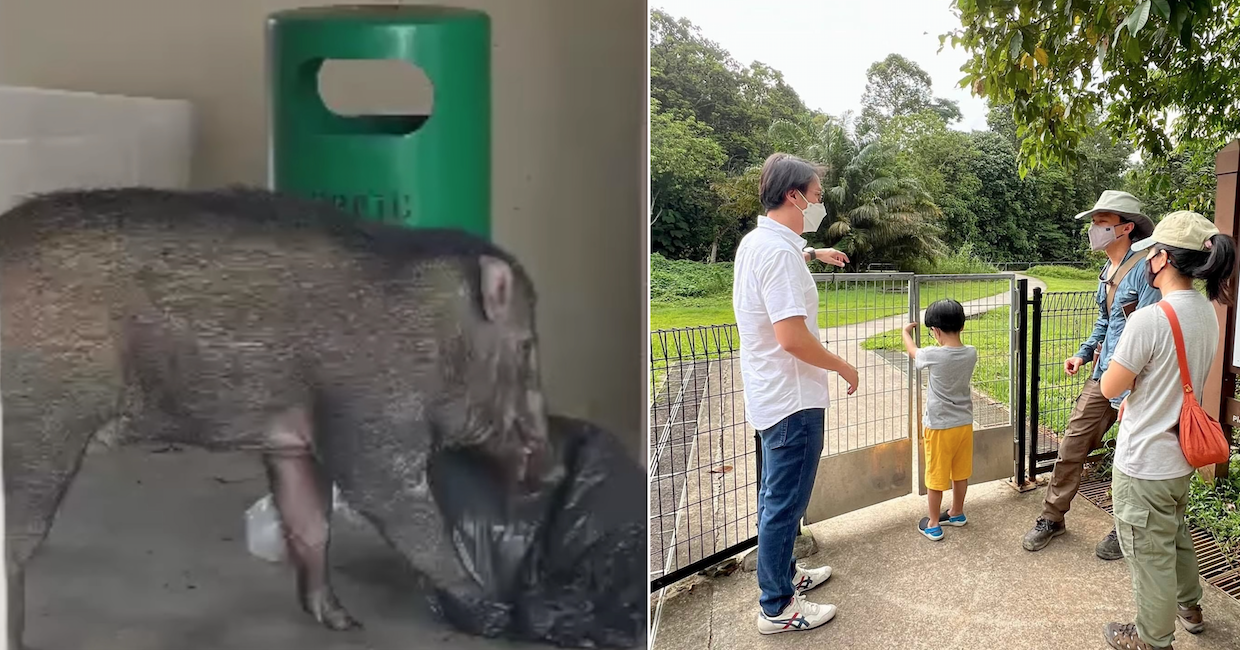 The wild boars roaming Bukit Panjang estate may have entered through a damaged park gate, said Member of Parliament (MP) Edward Chia in a Facebook update.

The MP said that concerned residents have sent him photos and videos of wild boar sightings.

In mid-February, one of the animals was also caught on camera rummaging through trash at Petir Road.

It was reportedly growing accustomed to the food waste from bins, leading to a potential conflict with humans.

Chia met with NParks officers on Mar. 15 for an update on the situation, as well as to check on Zhenghua Nature Park’s perimeter fence.

Through CCTV footage, NParks discovered that the wild boars likely entered the urban area via the park’s perimeter gate, which is also used by park visitors.

As the gate was damaged and left open, the boars managed to bypass it.

Discussions for new gate designs are ongoing, with Chia saying that NParks will speed up the installation of the new gates.

“I seek residents help to ensure the gates are closed and handle with care as previous gates were damaged,” he added.

Officers from NParks, who have been on nightly stake outs for the past three weeks, noted that there is one male boar left in the area.

Besides the damaged park gate, another factor that could have attracted the wild boars are feeding sessions by residents.

Chia revealed that they have detected feeding at Blocks 465 and 466 of the estate.

“I urge residents to stop feeding as it can attract not just boars but pigeons too. I’ve asked agencies to step up advisories and enforcements,” the MP said.

Previously, local biologist and National University of Singapore (NUS) lecturer N Sivasothi explained that processed food and “agricultural food” that people consume are rich in calories, and wildlife would choose to eat this if they can, as compared to natural foods from the wild.

Prolonged feeding can also lead to wild boars associating people as a source of food and becoming unafraid of approaching them.

SINGAPORE : A consortium of global energy and shipping organisations said on Tuesday it was…